You Belong to Me: A Novel (Paperback) 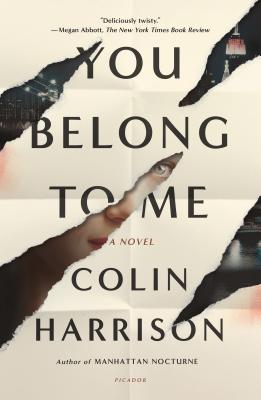 By Colin Harrison
$21.60
Temporarily Out of Stock. Usually Ships in 3-5 Days.

One can understand the eight-year gap since Colin Harrison's last New York City crime novel, Risk. His day job as editor-in-chief of Simon & Schuster's Scribner imprint during a transitional decade in publishing and bookselling was probably a pretty big time sink. Like the seven novels since his first (1990's Break and Enter), You Belong to Me is steeped in the stewpot of Harrison's city--each of its chapters is titled with a location described as a local might, e.g., Chapter 1: "West Forty-Ninth Street between Fifth and Sixth Avenues." "Crime novel" is perhaps too restrictive a label for Harrison's story of money, power, sex and the obsession to possess--both objects (rare maps) and people (spouses, family and friends). It's noir, but as Harrison said in a recent interview: "The city is always noirish. Noir is never going to leave us. We are noir."

Twice-divorced and in his 50s, with "some money but not big money... rumpled and wrinkled, his best years already behind him," Paul Reeves runs a lucrative boutique immigration law firm and collects old maps of New York City--a long-sought 1766 Stassen-Ratzer is available on the market for the first time. His neighbors in his high-rise apartment building are 32-year-old Iranian American financier Ahmed Mehraz ("full of himself, a world beater in a city full of them") and his trophy wife, Jennifer ("attractive in a very New Yorky manner... her brand"). When former baseball phenom Billy Wilkerson arrives to rekindle the passionate romance he had with "Jenny" in their late teens and to take her back to Texas, her comfortable marriage begins to unravel. Who better to turn to for help than her quiet, reliable neighbor Paul? With Paul competing with another mysterious bidder to lock up the Stassen-Ratzer purchase, and concealing Jennifer and Billy's affair to avoid Ahmed's network of mercenary operatives, You Belong to Me ratchets up the action and intrigue.

Harrison loads his New York City fiction with historical, geographical and ephemeral background, but the city's underbelly of violence and menace is never far away. He describes Staten Island "like Brooklyn had been sexually mounted by New Jersey and this was the offspring," and a black-tie fundraiser as "a pecuniary mating dance [where] certain individuals representing enormous sums of money... would copulate with other sums of money and create even more money." Chapters later, he details a gruesome crossbow murder by an undocumented former Mexican cartel assassin hiding from El Chapo in the Bronx. You Belong to Me is a solid addition to what has become Colin Harrison's own particular brand of New York City noir.

YOU BELONG TO ME . . . Paul Reeves is a successful immigration lawyer, but his passion is collecting old maps of New York, tangible records of the city’s rich history in an increasingly digital world. One afternoon he attends an auction with his neighbor Jennifer Mehraz, the beautiful young wife of an Iranian financier-lawyer, but halfway through the auction a handsome man in soldier fatigues appears in the aisle and whisks Jennifer away. YOU BELONG TO ME . . . A long-lost lover from Jennifer’s rural Pennsylvania past, the man sets off a series of alarming events as those close to Jennifer try to figure out who he is and how the two are connected, including her high-powered and possessive husband, whose ultimate goal is to make this embarrassing intrusion into his marriage disappear. YOU BELONG TO ME . . . At the same time, one of the world’s rarest and most inaccessible maps suddenly goes on sale, but before Paul can finalize a deal, another buyer snatches it out from under Paul’s nose, sending him on a quest to find out who the mysterious buyer is and how to get the map for himself.

Colin Harrison is the author of the novels You Belong to Me, Break and Enter, Bodies Electric, Manhattan Nocturne, Afterburn, The Havana Room, The Finder, and Risk. He serves as the editor in chief at Scribner, an imprint of Simon & Schuster. A graduate of Haverford College and the University of Iowa Writers’ Workshop, he is married to the writer Kathryn Harrison and lives in Brooklyn, New York, and Jamesport, Long Island.

PRAISE FOR YOU BELONG TO ME

“A classic noir triangle [that] widens quickly to introduce a roundelay of characters with volatile tempers and conflicting agendas . . . The common denominator among them seems to be a voracious hunger: for money, power, revenge . . . deliciously twisty . . . startlingly violent . . . The hard, hot beat of noir goes on.” —Megan Abbott, The New York Times Book Review

"Chilling and difficult and funny, horrifying and smart. Noir depends on bad decisions, and the novel has plenty of them." —Sam Sifton, The New York Times

"Terrific . . . A lapel-grabber . . . Spare, economical and hard-boiled . . . Hard not to be hooked. And you will be . . . Harrison’s noir isn’t what noir used to be. It’s high-tech, sophisticated and ready-made for the multiplex. That being said, Harrison’s prose is terse and nicely lurid. Plus, timely and caustic." —Brooklyn Daily Eagle

“Every book-reviewing cliche about a good thriller is not just true about Colin Harrison’s latest novel, but literally true. It really is riveting in the sense that you are not likely to move from your location once you start it. It really is a page-turner, and those pages turn fast. It really does grab you from the first sentence and never let you go . . . All very satisfying, and highly recommended.” —Buffalo News

"Brilliant . . . a fast-paced, unexpected hunt—one that includes hitmen, black-market business dealings, and one very valuable map—underscored by Harrison’s profound interrogation of the dynamics between generations, lovers, chasers, and history. The novel is deliciously satisfying, and you come away from it savoring New York of the past and present and all the twisted, nefarious, driven, and even good people—those who think they know where they’re walking—on its many storied streets." —Vogue

"You Belong to Me is an intriguing, moody tale of love, lust and avarice—and great summer reading." —BookPage

“A tightly wound tale of obsession and betrayal.” —Publishers Weekly

“Gritty whodunit by thriller-meister Harrison, the bard of Gotham mayhem . . . an elaborate story with many moving parts, some of them involving large piles of money, hit men of a decidedly murderous bent, wealthy expats and players from shadowy sultanates, map thieves . . . and an assortment of other people you probably wouldn't want to know. Harrison’s story moves nimbly. . . For fans of the Larsson/Ludlum flavor of action-packed, cynical thriller, where no good deed goes unpunished.” —Kirkus

“Colin Harrison’s New York is an eye-for-an-eye, dog-eat-dog Darwinian world with similar map coordinates to Tom Wolfe’s Manhattan and the Los Angeles of Raymond Chandler and James Ellroy . . . Mr. Harrison combines a Balzacian eye for social detail and a poet’s sense of mood with a sleazily sensationalistic plot . . . He succeeds in giving us a chilling, high-speed roller coaster of a ride that doubles as a sardonic sightseeing tour of the seamier side of New York City.” —Michiko Kakutani, The New York Times

“Colin Harrison will have you gasping for breath.” —Jocelyn McClurg, USA Today

“With the narrative drive of a hurtling subway express, Harrison . . . plunges readers into a scary subterranean world in which the only comfort comes from the neon flashes of his prose.” —People

“You don’t read Harrison; you devour him.” —Karen Heller, The Philadelphia Inquirer

“[Colin Harrison is] the class act of the urban thriller.” —Entertainment Weekly