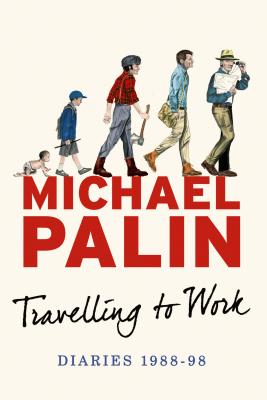 By Michael Palin
Email or call for price
Out of Print, and unable to order.

This is book number 3 in the Michael Palin Diaries series.

As in Halfway to Hollywood and The Python Years, Travelling to Work contains a decade's worth of unedited, unabridged diary entries from multi-talented funnyman Michael Palin. In this volume, the last Palin has agreed to publish, the former Python documents his experience hosting a series of BBC travel documentaries even as he continues to develop new dimensions as a writer and actor.

Python faithful will love Palin's candid comments and wry wit even as they are awed by his dogged work ethic and myriad accomplishments. From his work for the BBC to his dramatic portrayal of the headmaster on Alan Bleasdale's award-winning drama GBH, to his success as screenwriter, playwright and novelist, these pages display a true modern-day Renaissance Man. Included as well are behind the scenes stories from the making of Fierce Creatures, the tumultuous follow-up to A Fish Called Wanda, along with Palin's reflections on dealings with his manager, editors and publishers--enough insider information to please any show business enthusiast.

In short, Travelling to Work is a roller-coaster ride driven by the Palin hallmarks curiosity, a sense of adventure and unflappable cool demonstrating he is truly, in his own words, 'someone grounded and safe who can be tempted into almost anything.'

MICHAEL PALIN is a comedian, novelist, actor, playwright, and founding member of Monty Python. He is the author of the novel Hemingway's Chair as well as several books on the history of Monty Python, including The Pythons, and numerous travel guides, including Brazil and Sahara.  He also happens to be one of the funniest people on the planet.  He lives in London, England.

“A satisfying if sometimes-dark read for Palin's many fans. Those interested in the inner workings of showbiz will find much of value, too.” —Kirkus Reviews

"The continuing chronicles of Palin will be of interest to Python fans, Anglophiles, and anyone who has interest in the cultural world of the 1990s, as they provide delightful reading and time well spent with a fascinating and perceptive man." —Library Journal

“A man as intelligent and witty as Palin is worth the effort of getting to know.” —The Washington Post on The Python Years

“Palin has a novelist's eye for character and detail, and his observations of the entertainment world, filmmaking, his family relationships, and such external details as politics, current events, travel, and the weather are written with style and a distinctly subtle wit that gives this rich volume the drive of an epistolary novel” —Library Journal

“Pythonphiles will find this essential, of course. But fans of good writing should dip into these pages, too, for Palin--Michael, not Sarah--knows his way around a book.” —Kirkus Reviews on The Python Years

“For Palin it has been one hell of a ride, but he seems to have maintained equilibrium all along the way. . . . In sum, it's tempting to call him a Renaissance Man. But that, as any Pythonite would be quick to tell you, would be silly.” —Jonathan Yardley Washington Post Book World on The Python Years

“Michael Palin is not just one of Britain's foremost comedy character actors, he also talks a lot. Yap, yap, yap he goes, all day long and through the night . . . then, some nights, when everyone else has gone to bed, he goes home and writes up a diary.” —John Cleese on The Python Years

“Charming and at times revelatory . . . A voice of (relative sanity) in the eye of a comedic storm, Palin paints so vivid a picture that the reader becomes a Python by proxy.” —The New York Times Book Review on The Python Years

“It is terrifically good: funny, astute, and wonderfully written. . . .” —The Boston Globe on The Python Years

“This combination of niceness, with his natural volubility, creates Palin's expansiveness.” —David Baddiel, The Times (London) on The Python Years, The Times

“A real delight to read.” —Saga Magazine (UK) on The Python Years

“His showbiz observations are so absorbing. . . . Palin is an elegant and engaging writer.” —William Cook, The Guardian (UK) on The Python Years

“A wealth of fascinating stuff about Monty Python.” —The Independent (UK) on The Python Years

“Our favourite TV explorer shows us the workings of an unstoppable machine.” —Daily Express (UK) on The Python Years

“A riveting commentary to a remarkably creative decade.” —Academy (UK) on The Python Years