The Affairs of Others: A Novel (Paperback) 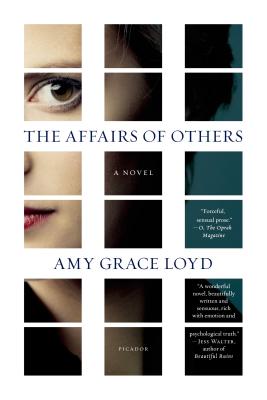 Five years after her young husband's death, Celia Cassill has moved from one Brooklyn neighborhood to another, but she has not moved on. The owner of a small apartment building, Celia believes that she has a right to her ghosts, and she has chosen her tenants for their ability to respect one another's privacy. But everything changes with the arrival of Hope, a dazzling woman of a certain age on the run from her husband's recent betrayal. When Hope begins a torrid and noisy affair, and another tenant mysteriously disappears, the carefully constructed walls of Celia's world are tested and the sanctity of her building is shattered. Ultimately, Celia and her tenants must abandon their separate spaces for a more intimate one, and the promise of genuine joy.

Amy Grace Loyd investigates interior spaces, of the body and the New York warrens in which her characters live, offering a startling emotional honesty about the traffic between men and women. The Affairs of Others is a story about the irrepressibility of life and desire, no matter its sorrows or obstacles.

AMY GRACE LOYD is an executive editor at Byliner Inc. and was the fiction and literary editor at Playboy magazine. She is the author of The Affairs of Others. A recipient of both MacDowell and Yaddo fellowships, she lives in Brooklyn, New York.

“[A] mesmerizing debut...beautifully, even feverishly described. As Celia discovers, the magnetic pull of other people's everyday experiences proves impossible to resist.” —Entertainment Weekly

“Loyd succeeds at the most difficult task for such a circumscribed setting--making the granular details of her characters' travails feel as though they added up to more than the sum of their parts.” —The New Yorker

“From start to finish, Loyd's prose flows exquisitely through the story, as she limns the depths of the protagonist's mind, the complexity of human intimacy, and the idiosyncrasies of each new character with the grace of a seasoned novelist.” —Vanity Fair

“Celia's journey is beautifully charted in this debut, with prose that mirrors her existence in her barely furnished apartment--confined, spare, but swirling with fierce emotion and insights.” —People

“An intimate portrayal of the walls erected by a woman after her husband's death, and how impulsive encounters with others break them down….Loyd's character study is narrow in scope but long on intensity and emotion.” —Publishers Weekly

“Debut novels don't come any more sure-handed and deftly written than The Affairs of Others. But it's the damaged, brokenhearted Celia--Amy Grace Loyd's brave, all-in protagonist--who latches on to us and refuses to loosen her grip.” —Richard Russo, author of Empire Falls

“Rich and fresh...The writing is just so wonderfully good: What other authors labor over, Loyd seems to just toss off. Throughout there are sentences to linger over, or for me to grin at with envy. Loyd has written a Rear Window story of a confined society described with Hitchcockian, voyeuristic detail.” —Ron Hansen, author of Mariette in Ecstasy