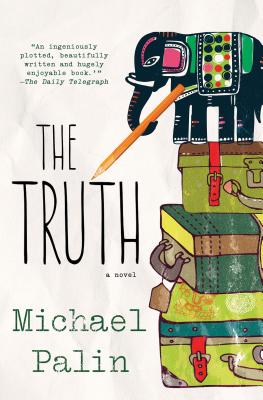 By Michael Palin
$27.49
Out of Print - Contact us to order used copies.

"An ingeniously plotted, beautifully written and hugely enjoyable book that raises tricky questions about... our need for heroes and] the price of personal compromise.'" "The Daily Telegraph"

For the first time since his much-beloved tale "Hemingway's Chair" was published in 1998, Michael Palin pens a new novel featuring the warm and witty story of an everyman, a tantalizing offer, a journey to India, and the search for the truth.

Keith Mabbut is at a crossroads in his life. A professional writer of some repute, he has reached the age of fifty-six with nothing resembling the success of his two great literary heroes, George Orwell and Albert Camus. When he is offered the opportunity of a lifetime to write the biography of the elusive Hamish Melville, a widely respected and highly influential activist and humanitarian he seizes the chance to write something meaningful. His search to find out the real story behind the legend takes Mabbut to the lush landscapes and environmental hotspots of India.

The more he discovers about Melville, the more he admires him and the more he connects with an idealist who wanted to make a difference. But is his quarry really who he claims to be? As Keith discovers, the truth can be whatever we make it.

In this wonderful, heartwarming novel, Michael Palin turns his considerable skills to fiction in the story of an ordinary man on an extraordinary adventure.

" Palin's] book is well paced, his prose, carefully hewn, his characters fully developed and convincingly human. And his comic timing is impeccable." "The Washington Post "on "Hemingway's Chair"

"This book's strengths are . . . its dry, deftly, understated wit, its careful plot and character construction; it's clever, on-the-money dialogue . . . Those pleasures carry you a long way." "The New York Times Book Review" on "Hemingway's Chair.

MICHAEL PALIN is a comedian, novelist, actor, playwright, and founding member of Monty Python. He is the author of the novel "Hemingway's Chair "as well as several books on the history of Monty Python, including "The Pythons, " and numerous travel guides, including "Brazil "and "Sahara. "He also happens to be one of the funniest people on the planet. He lives in London, England.

Praise for The Truth

“With passion and flair, Palin (of Monty Python fame) details a journalist’s quest to discover the truth about a reclusive environmental activist…. It’s been a long time since Palin’s first novel (Hemingway’s Chair, 1998). The wait for this compelling book has been more than worth it.” –Kirkus, starred review

“Palin's plotting is inspired, the writing is crisp, and the unexpected twists of the story are eye-opening and often hilarious. What starts as a book about a schlumpy hack writer looking to save himself turns into a layered, empathetic look at progress, hero worship and the slipperiness of truth and lies themselves.” –Creative Loafing

“The Truth is an ingeniously plotted, beautifully written and hugely enjoyable book that raises tricky questions about the cost of progress, and even trickier ones about our need for heroes, the price of personal compromise, and what Palin calls ‘the uncontroversial assumption that the truth is immutable.’” —The Daily Telegraph

“The Truth is the perfect example of his literary brilliance—here's hoping he won't leave it so long until his next novel.” —Stylist

“It's a feel-good story leaving the reader on a real high.” —Rachel Redford, The Observer

“Palin's dryly understated exasperation with the absurdities of daily life and his ear for dialogue raise an appreciative smile.” —The Sunday Times Culture

“Michael Palin has proved himself a major talent at many things. Storytelling is another.” —Entertainment Focus

“The Truth is a wonderful, heart-warming novel exploring the issues of media manipulation, private lives and public persona, and the balance of progress against environmental damage.” —LoveReading UK

“Reads like a dream.” —Christopher Bray, The Daily Express

“The Truth is a compelling and zippily paced book.” —Time Out

“It's an enthralling and almost Kipling-esque tale for our times.” —Metro

"His book is well paced, his prose, carefully hewn, his characters fully developed and convincingly human. And his comic timing is impeccable." --The Washington Post

"Funnyman Palin brings a light touch to this yarn, treating his characters and their many weaknesses with an affection that will have readers rooting for his unlikely hero." --Pubishers Weekly

"The spirit of Hemingway is evident in Palin's prose." --The Plain Dealer (Cleveland)

"This comic novel should enjoy critical acclaim while finding popularity among readers who can't distinguish a Python from a garden snake. It is a tale of frustration that is both gentle and snappy, human to the core." --Library Journal