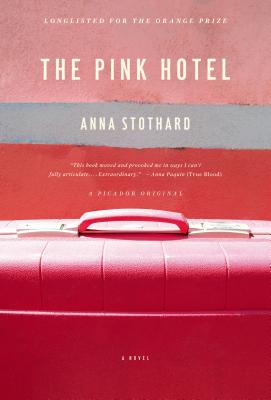 By Anna Stothard
$16.50
Out of Print - Contact us to order used copies.

LONGLISTED FOR THE ORANGE PRIZE
"NEW YORK TIMES BOOK REVIEW" EDITORS' CHOICE
"This book moved and provoked me in ways I can't fully articulate....Extraordinary." Anna Paquin ("True Blood")
A seventeen-year-old girl pieces together the mystery of her mother's life and death among the bars and bedrooms of Los Angeles in this dazzling debut novel.
A raucous, drug-fueled party has taken over a boutique hotel on Venice Beach it's a memorial for Lily, the now-deceased, free-spirited proprietress of the place. Little do the attendees know that Lily's estranged daughter and the nameless narrator of this striking novel is among them, and she has just walked off with a suitcase of Lily's belongings.

Abandoned by Lily many years ago, she has come a long way to learn about her mother, and the stolen suitcase stuffed with clothes, letters, and photographs contains not only a history of her mother's love life, but perhaps also the key to her own identity. As the tough, resourceful narrator tracks down her mother's former husbands, boyfriends, and acquaintances, a risky reenactment of her life begins to unfold. Lily had a knack for falling in love with the wrong people, and one man, a fashion photographer turned paparazzo, has begun to work his sinuous charms on the young woman.

Told with high style and noirish flare, Anna Stothard's "The Pink Hotel "is a powerfully evocative debut novel about wish fulfillment, reckless impulse, and how we discover ourselves.

Anna Stothard studied English at Oxford and then moved to Los Angeles, where she was awarded a screenwriting scholarship with the masters program at the American Film Institute. She is currently living in Chalk Farm, London, and writing her next novel.

Praise for The Pink Hotel

“This book moved and provoked me in ways I can't fully articulate....Extraordinary.”—Anna Paquin (True Blood)

“Astonishing… the novel speeds to a stunner of an ending, one that is both surprising, shocking, and even inevitable…. While we may never receive the name of the narrator, thanks to Stothard’s prodigious gifts and richly woven novel, we come to know her — and what we know is unforgettable.” —Caroline Leavitt, The Boston Globe

“Stothard’s prose is as lovely as it is lively… The Pink Hotel wisely and urgently illustrates the difficulty of truly knowing ourselves or anyone else.” —The New York Times Book Review (Editors' Choice)

“[The narrator’s] forlorn story is bound to make readers ache with sympathy… Stothard is a five-sense writer, as rare as the five-tool ballplayer…. [The] images, which shimmer in Stothard’s accomplished, lyrical prose, carry us willingly along on her narrator’s painful journey to self-realization.” —Heather McAlpin, The Washington Post

“[The Pink Hotel] is easy to read and impossible to put down—and that’s before you get to the twist ending… I’m still trying to lift my jaw off the ground…. Perfect for summer reading.” —Nylon

“A noirish nod to the City of Angels.” —O, The Oprah Magazine (A Debut Novel to Pick Up Now)

“Startling.... The Pink Hotel is a spellbinding story about identity and inheritance, and how we know who we are.”—The Daily Beast

“Stothard’s work is thoughtful and engaging, and she makes L.A. and its many denizens glow on the page like neon lights…. A satisfying read.” —ZYZZYVA magazine

“An emotional scavenger hunt…. Stothard’s characterization of a teenage girl is spot on, and she has used her own knowledge of both Los Angeles and England to enrich the complex cultural backdrop against which her saga unfurls.” —Booklist

“Sometimes you have to steal your own heritage, and that's just what the narrator of Anna Stothard's debut does, with a cunning stealth that endears her to us across every page. Her escapades are at once fantastic and believable. You won't know this narrator's name, but you'll never forget her or The Pink Hotel.”—Tupelo Hassman, author of Girlchild

“Picture Carson McCullers mashed up with Tom Waits and David Lynch, and you get a sense of the unique, edgy novel you're holding in your hands. The Pink Hotel is mysterious, lyrical, and utterly absorbing, by turns funny and forlorn. Anna Stothard is a precise, insightful observer of what it means to be human, and her writing bristles with sexiness and suspense, love, loss, and longing. This is the best book I've read in years.”—Davy Rothbart, author of My Heart Is an Idiot

“Anna Stothard’s writing feels both fresh and classic, with its gorgeous descriptions of Los Angeles’s seductive and corrupting beauty, its opium dreams and a damaged yet enigmatic heroine. A blazing noir firecracker of a debut.”—Denise Hamilton, author of Damage Control

“A poignant novel about identity, and a love/hate letter to L.A.”—Glamour (London)

“A sensitively drawn portrait of a troubled young woman, [Stothard’s narrator] is convincing…An elegant noirish mystery…This touching, convoluted love-story is shot through with a distinctive talent.”—Amanda Craig, The Independent

“Matters of personal identity underlie an exhilarating ride through L.A.’s seamier side in the company of a hard-bitten yet highly engaging protagonist.”—Ross Gilfillan, Daily Mail (London)