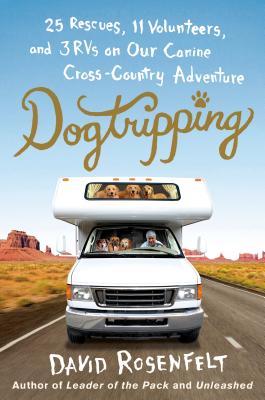 By David Rosenfelt
$25.99
Out of Print - Contact us to order used copies.

David Rosenfelt's Dogtripping is moving and funny account of a cross-country move from California to Maine, and the beginnings of a dog rescue foundation

When mystery writer David Rosenfelt and his family moved from Southern California to Maine, he thought he had prepared for everything. They had mapped the route, brought three GPSs for backup, as well as refrigerators full of food, and stoves and microwaves on which to cook them. But traveling with twenty-five dogs turned out to be a bigger ordeal than he anticipated, despite the RVs, the extra kibble, volunteers (including a few readers), and camping equipment. Rosenfelt recounts the adventure of moving his animal companions across the United States with humor and warmth, and tells the tale of how he and his wife became passionate foster parents for rescue dogs, culminating in the creation of the Tara Foundation and successfully placing several thousand dogs with loving families.
An NPR Best Book of 2013

DAVID ROSENFELT is the Edgar-nominated and Shamus Award-winning author of more than a dozen Andy Carpenter novels, including One Dog Night, Collared, and Deck the Hounds; the Doug Brock thriller series, which starts with Fade to Black; and stand-alone thrillers including Heart of a Killer and On Borrowed Time.

Rosenfelt and his wife live in Maine with an ever-changing pack of rescue dogs. Their epic cross-country move with the 25 of these dogs, culminating in the creation of the Tara Foundation, is chronicled in Dogtripping.

“Dogtripping is a delightful romp through [the] adventures — and misadventures — of running a dog rescue...If it's been too long since you enjoyed a funny, sweet, romantic tale, read this book.” —Associated Press

“A story as poignant as it is hilarious.” —Library Journal (starred review)

“Fans of the Carpenter novels will recognize the author's familiar writing style: relaxed and lightly funny, but serious when the moment calls for it...Spirited and absolutely absorbing reading for fans of canine capers--both fictional and otherwise.” —Booklist

“Dogtripping is a book that will make you laugh, cry, and want to adopt a dog from the nearest shelter--all on the same page. Rosenfelt's extraordinary narrative style makes it fantastically easy to read in one sitting; in fact it's difficult to put down. Dogtripping contains Rosenfelt's signature style, filled with self-deprecating comments and wry humor. It's funny, poignant, and at times, downright sad. In short--it's wonderful.” —The Examiner

“An uplifting story that exemplifies the compassion and dedication which are at the heart of the selflessness, serious work, and vital importance of rescue, told with humor and a refreshing sense of self-deprecation.” —Larry Levin, New York Times bestselling author of Oogy: The Dog Only A Family Could Love

“Dogtripping contains a lot of great words--but my favorite is the one that David Rosenfelt refuses to write. He does not know the meaning of ‘unadoptable.' His dedication to dog rescue infuses every page with life's greatest lessons, of love and caring.” —Kim Kavin, author of Little Boy Blue