The Kids Got It Right: How the Texas All-Stars Kicked Down Racial Walls (Hardcover) 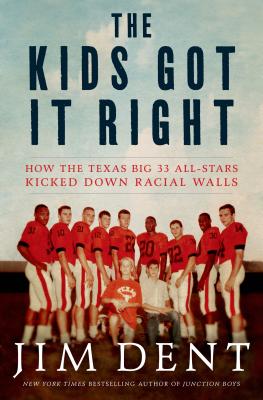 "New York Times" bestselling author Jim Dent pens the compelling story of how a black and white player came together to break the color barrier in Texas football in 1965. Jerry LeVias and Bill Bradley bonded as friends at the Big 33 high school all-star game, producing a dramatic finish that fans still talk about.

Jim Dent takes the reader to the heart of Texas football with the incredible story of how two young men broke the chain of racism that had existed for more than half a century. In 1965, black and white players barely mixed in Texas. That summer, Jerry LeVias and Bill Bradley came together at the Big 33 game in Hershey, Pennsylvania. When no one else would room with LeVias, Bradley stepped forward. The two became the closest of friends and the best of teammates. LeVias called Bradley "my blue-eyed soul brother.'' Big-hearted, gregarious, and free-spirited, Bradley looked out for LeVias one of three black players on the team.

The Texas team came to Hershey with a mandate to win. A year earlier, Texas had lost to the Pennsylvania all-stars 12-6 in the most significant defeat in the state's proud history. This was considered blasphemy in a place where football outranked religion. Texas coach Bobby Layne was mad-as-hell that he was forced to play with second stringers in '64. So he and assistant coach Doak Walker traveled to Austin and asked Texas governor John Connally to end the scheduling conflict with the in-state all-star game so he could suit up the best players. Layne also sought permission to recruit black players. After all, Texas was flush with black stars, some of whom would mature into the most notable players in the history of the National Football League.

Layne's scheme never would have worked without Bradley and LeVias. Together and with Layne's indomitable will to win the two led their team proudly to face down the competition at Hershey Stadium. "The Kids Got It Right "is a moving story, reminiscent of "Remember The Titans." Jim Dent once again brings readers to cheers and tears with a truly American tale of leadership, brotherhood, and good-ol' Texas-style football.

JIM DENT, a New York Times bestselling author, has written ten books including fan favorites Twelve Mighty Orphans and Junction Boys, which became a popular ESPN movie. He is an award-winning journalist who covered the Dallas Cowboys for the Dallas Times Herald and Fort Worth Star-Telegram for eleven years. For more information on the author and his book-signings, visit Jim Dent on Facebook on his personal page.

Praise for The Kids Got it Right:

“If I could have any sports wish granted today, it would be that every student from seventh grade up in Southeast Texas be required to read Jim Dent’s latest and, without question, most important book — The Kids Got It Right. Dent, who is a masterful story teller, is at his best with this real-life tale of how a courageous black athlete from Beaumont, Jerry LeVias, and a white superstar from Palestine, Bill Bradley, helped break down racial barriers in the 1960s in the context of a football holy war between Texas and Pennsylvania.” –Port Arthur News

“Dent (The Junction Boys) spotlights on of the prouder moments in Texas gridiron lore, with its first high school football integration effort winning the 1965 Big 33… A work of tolerance, sportsmanship, and friendship, Dent’s account of coach Layne and his boys is a feel-good American story that never slumps into slogans or stereotypes.” –Publishers Weekly

“Porlific and popular sportswriter Jim Dent relates the forgotten story of the 1965 Big 33 All-Star game between high schoolers representing Pennsylvania and Texas… A warm and positive take on times of change that should appeal to football fans and broader readers.” –Library Journal

“I know how big the Big 33 game was because I covered it back in the sixties in Hershey, Pennsylvania. It was the Super Bowl before there was such a thing. Recruiters and writers came from everywhere just to see the talent. Once more, Jim Dent has brought home a story that is both fun and inspirational. Great writing, great stuff.’’ --Randy Galloway, ESPN Radio and Fort Worth Star-Telegram

“I’ve been covering major sports in Texas for more than thirty years, and I must confess that my favorite ones are always about the high school athletes. This terrific tale about the friendship of Jerry LeVias and Bill Bradley shines a bright light into a dark hole concerning the death of segregation. It is the best high school story I’ve seen yet. Of course, there is no one better to write it than Jim Dent because he is the best story-teller I know.’’ --Dale Hansen, WFAA Sports Anchor

"It was first down and seemingly a lifetime for racial integration of Texas high school football. Jim Dent tells the compelling story of how two great players began that drive.'' --Randy Harvey, Houston Chronicle

"Jim Dent has a great sense of the history of football in Texas, and it's place in our state's culture. Like his other books, The Kids Got It Right carries a message that will resonate with any reader. His book takes you back to a fascinating time in our country that seems distant, and yet really wasn't that long ago." --George Dunham, KTCK, The Ticket

Praise for Courage Beyond the Game:

“Jim Dent, dadgum him, keeps writing books I wish I’d written. Like The Junction Boys and Twelve Mighty Orphans, to name two. Now here he comes with another terrific effort, Courage Beyond the Game, the story of the most courageous kid to ever pull on a football suit. If you pick it up, it’s guaranteed to pick you up.’’ --Dan Jenkins, author of Semi-Tough and Dead Solid Perfect

“Jim Dent is a world class story teller, and in Freddie Steinmark’s courageous and triumphant fight to be a man of substance, he’s found a tale worthy of his ample talents.  Dent will bring tears to your eyes, and Steinmark’s example will make you want to be a better person.’’ --Joe Drape, New York Times bestselling author of Our Boys: A Perfect Season on the Plains with the Smith Center Redmen

“You will cheer and you will weep as you read Jim Dent’s irresistible rendering of one of the great real-life dramas in college football history. Dent has brought plenty of tough guys to life in his other books, but little Freddie Steinmark surely ranks as the toughest. Dent has brilliantly re-cast a Longhorn legend. I could not put Courage Beyond the Game down.’’ --John Eisenberg, author of That First Season: How Vince Lombardi Took the Worst Team in the NFL and set it on the Path to Glory, and Cotton Bowl Days: Growing up with Dallas and the Cowboys in the 1960s

''Freddie Steinmark's story will inspire you and make you cry, and Jim Dent has told it better than anyone in Courage Beyond the Game. Jim's eye for detail and gifted writing will take you back to another place and time, and a new generation of college football fans will learn why Freddie lives forever in the hearts of those he touched in his brief life.'' --Richard Justice, lead sports columnist for The Houston Chronicle

“Courage Beyond the Game is a wonderful book whose protagonist, the doomed University of Texas safety Freddie Steinmark, delivers just what the title promises. Veteran sports author Jim Dent infuses a narrative whose ending we all know with depth, tenderness, and unexpected insights. His Steinmark could have easily been a cardboard saint. Instead the Steinmark we meet is intensely human, inspirational, funny and utterly unforgettable. This was a book I couldn’t put down.’’ --Bill Livingston, Cleveland Plain Dealer sports columnist

“Jim Dent once again proves his mastery of the way football felt and sounded in the days of Texas and the Southwest Conference. His inspirational portrait of Freddie Steinmark takes us back to a purer time.’’ --Mark Whicker, Orange Country Register sports columnist

“Freddie Steinmark defined college football with his unquenchable thirst for life, unbridled spirit through adversity, and rare passion for the game he lived to play. Jim Dent can tell a story life like few others and brought this must-read, must-be-told account back to life for all to relish with his riveting, gut-wrenching book, Courage Beyond the Game.’’ --Kirk Bohls, Austin American Statesman sports columnist