Good Profit: How Creating Value for Others Built One of the World's Most Successful Companies (Hardcover) 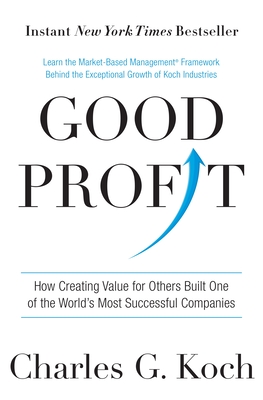 In 1961, Charles Koch joined his father’s Wichita-based company, then valued at $21 million. Six years later, he was named chairman of the board and CEO of Koch Industries, Inc. Today, Koch Industries’ estimated worth is $100 billion -- making it one of the largest private companies in the world. Koch exceeds the S&P 500’s five-decade growth by 27-fold and plans to double its value on average every six years.
What exactly does this company do and why is it so remarkably profitable? Koch’s name may not be on your stain-resistant carpet, stretch denim jeans, the connectors in your smart phone, or your baby’s ultra-absorbent diapers but it makes them all. And Koch’s Market-Based Management® system is what drives these innovations and many more.
Based on five decades of interdisciplinary studies, experimental discovery, and practical implementation across Koch businesses worldwide, the core objective of MBM is to generate good profit. Good profit results from products and services that customers vote for freely with their dollars, products that improve people’s lives.  It results from a culture where employees are empowered to act entrepreneurially to discover customers’ preferences and the best ways to satisfy them. Good profit is what follows when long-term value is created for customers, employees, shareholders, and society.
Here, drawing on revealing, honest, and previously untold stories from his nearly six decades in business, Koch walks the reader through the five dimensions of MBM to show how to apply its framework to generate more good profit in any business, industry, or organization of any size.  Readers will learn how to:
·         Craft a vision for how to thrive in spite of increasingly rapid disruption
·         Select and retain a workforce possessing both virtue and talent
·         Create an environment of knowledge sharing that prizes respectful challenges from everyone at every level
·         Award employees with ownership and decision rights based on their proven contributions, not job title
·         Motivate all employees to maximize their contributions by structuring incentives so compensation is limited only by the value they create

A must-read for any leader, entrepreneur, or student, as well as anyone who wants a more civil, fair, and prosperous society, Good Profit is destined to rank as one of the greatest management books of all time.

Charles G. Koch is chairman of the board and CEO of Koch Industries, Inc., a position he has held since 1967. He is renowned for building Koch Industries into the second-largest private company in the nation -- currently valued at $100 billion-- making him the fourth wealthiest man in America, according to Forbes.

Wichita, Kansas-based Koch Industries, Inc. began as Wood River Oil and Refining Co. in 1940. Koch employs more than 100,000 people in about 60 countries worldwide, with 60,000 of those in the United States. Since January 2009, Koch has earned more than 1,000 awards for safety, environmental excellence, community stewardship, innovation, and customer service.

"Charles Koch is right, there is a difference between Good Profit and bad profit. And this book helps show you the way to good profit – whether you work for an international supermarket chain, a medium-sized regional business, or your own start-up.”
- John Mackey, Co-Founder and Co-CEO Whole Foods Market


Charles Koch’s Good Profit is a must read for any businessperson or serious student of business.  As a transformative leader of Koch Industries, Koch the author delivers not just business wisdom but the economic punch of decision-making at the margin and Market-Based Management.  The book, like Koch’s management tools, bridges theory and practice masterfully.  But the title’s engine says it best: ‘Good profit’ arises from delivering value to customers.  And Koch Industries’ spectacular success over the past half century shows that good profit creates great value.
- Glenn Hubbard, Dean and Russell L. Carson Professor of Finance and Economics, Columbia Business School

“The ultimate “how to” book on running a successful business.  Charles Koch’s approach is extraordinarily thoughtful and comprehensive, reflecting his more thasn 50 years of experience in growing Koch Industries to the second largest private corporation in America.  His emphasis on the key role that values play in his leadership and management model is especially important in today’s business environment.  A must read for those who want to take their enterprise to the next level.”
-- Richard B. Myers, General, USAF, Ret., 15th Chairman of the Joint Chiefs of Staff

“Charles Koch is a genuine patriot, and his lifelong mission is to make America as strong and free as she can be.  He believes the principles of economic opportunity that have guided America are worth protecting.  This book will teach us how."   -
-(Papa) John Schnatter, CEO Papa John’s Pizza


“Good Profit is an exploration into the mind and philosophy of one of America’s most extraordinary businessmen.  Charles Koch explains – through example, anecdote, and impressive analysis – how Market-Based Management has enabled Koch Industries to create real, sustainable value for consumers and businesses alike.  You’ll be pleased by his openness.  He’s as candid about his failures as he is his successes, and willing to expose both in the interest of the greater good. “
-- Leslie Rudd, Entrepreneur, Winery Owner, former owner Dean & DeLuca

"Writing about Charles Koch has become a cottage industry but, until now, there's been little from the man himself.  Read his new book, Good Profit, and you can learn directly from him what he thinks and how he has built one of the biggest and most successful businesses in the world."    -- Michael L. Lomax, Ph.D. President and CEO, United Negro College Fund (UNCF)


“Here is a clear example of the American dream and how our country benefits when successful entrepreneurs create new jobs (and more taxes for government services) while providing the golden egg for philanthropic efforts.  The real story behind this book is not just Charles Koch’s secret to success – it is the remarkable path he and his brother took in becoming two of America’s most generous philanthropists.  Their recipe for creating “good profits” has enabled them to grow their businesses, reward their employees and still have plenty left over to invest in the nation’s most important charitable groups and institutions supporting America’s freedom.  It is a worthwhile read!”
--Charles R. Schwab