The Girl in the Tower: A Novel (Winternight Trilogy #2) (Paperback) 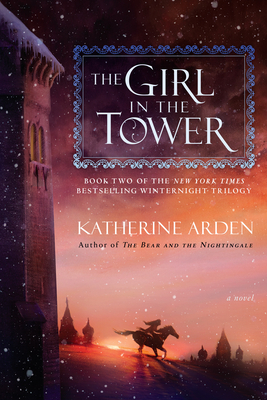 By Katherine Arden
$17.00
On Our Shelves Now

This is book number 2 in the Winternight Trilogy series.

Arden's use of Baba Yaga lore and Russian history weave together masterfully to develop the story in her follow-up to The Bear and the Nightingale.

After leaving her home of Lesnaya Zemlya, Vasya decides she will be a traveler. Aided by the mysterious Winter King, she gains strength and fighting skill, while also realizing she must mask her femininity to travel safely along the roads of 'Rus. Her trusty and other-worldly steed Solovey is her sole companion. But when villages start burning and young girls are captured, Vasya realizes she cannot amble on her way; she must help others.

Added to this installment is the Prince of Moscow, a head-strong, impulsive leader who quests for glory and notoriety. When news of the burning and captivity reaches him, the Prince calls on his warrior monk Sasha (Vasya's brother) to help him find the perpetrators. In twists and turns magnificent, Sasha and Vasya are reunited, and Sasha must hide Vasya's womanhood in order to save her dignity and his own neck.

When Vasya winds her way to Moscow as the Prince of Moscow's newest, most prized warrior (Vasilii the Brave), she finds that city life is as mysterious, layered, and dangerous as anything she feared in the forest.  She also meets her niece Masha, who is blessed (or cursed) with the gift of seeing domovoi; in Masha, Vasya sees herself.

The Girl in Tower builds on the lore Arden began with her first book, and Vasya remains ever the strong-willed young woman. This is a sequel you won't want to miss.

A remarkable young woman blazes her own trail, from the backwoods of Russia to the court of Moscow, in the exhilarating sequel to Katherine Arden’s bestselling debut novel, The Bear and the Nightingale.

Katherine Arden’s enchanting first novel introduced readers to an irresistible heroine. Vasilisa has grown up at the edge of a Russian wilderness, where snowdrifts reach the eaves of her family’s wooden house and there is truth in the fairy tales told around the fire. Vasilisa’s gift for seeing what others do not won her the attention of Morozko—Frost, the winter demon from the stories—and together they saved her people from destruction. But Frost’s aid comes at a cost, and her people have condemned her as a witch.

Now Vasilisa faces an impossible choice. Driven from her home by frightened villagers, the only options left for her are marriage or the convent. She cannot bring herself to accept either fate and instead chooses adventure, dressing herself as a boy and setting off astride her magnificent stallion Solovey.

But after Vasilisa prevails in a skirmish with bandits, everything changes. The Grand Prince of Moscow anoints her a hero for her exploits, and she is reunited with her beloved sister and brother, who are now part of the Grand Prince’s inner circle. She dares not reveal to the court that she is a girl, for if her deception were discovered it would have terrible consequences for herself and her family. Before she can untangle herself from Moscow’s intrigues—and as Frost provides counsel that may or may not be trustworthy—she will also confront an even graver threat lying in wait for all of Moscow itself.

Praise for The Girl in the Tower

“[A] magical story set in an alluring Russia.”—Paste

“Arden’s lush, lyrical writing cultivates an intoxicating, visceral atmosphere, and her marvelous sense of pacing carries the novel along at a propulsive clip. A masterfully told story of folklore, history, and magic with a spellbinding heroine at the heart of it all.”—Booklist (starred review)

Katherine Arden is the author of the national bestseller The Bear and the Nightingale. Born in Austin, Texas, Arden spent a year of high school in Rennes, France. Following her acceptance to Middlebury College in Vermont, she deferred enrollment for a year in order to live and study in Moscow. At Middlebury, she specialized in French and Russian literature. After receiving her BA, she moved to Maui, Hawaii, working every kind of odd job imaginable, from grant writing and making crêpes to guiding horse trips. Currently she lives in Vermont, but really, you never know.

“Arden’s lush, lyrical writing cultivates an intoxicating, visceral atmosphere, and her marvelous sense of pacing carries the novel along at a propulsive clip. A masterfully told story of folklore, history, and magic with a spellbinding heroine at the heart of it all.”—Booklist (starred review)

“A compelling, fast-moving story that grounds fantasy elements in a fascinating period of Russian history.”—Kirkus Reviews

“[A] magical story set in an alluring Russia.”—Paste