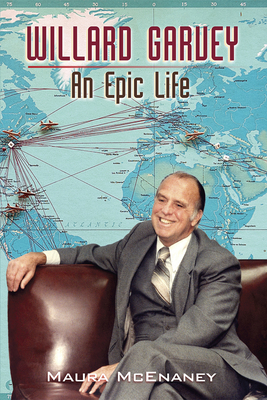 Pulitzer Prize–winning journalist Maura McEnaney’s fascinating and wide-ranging biography of businessman and entrepreneur Willard Garvey is, in many ways, a history of 20th-century America itself. Having come of age during the Dust Bowl, Garvey rode the rails during the height of the Great Depression to work in the California orchards made famous by The Grapes of Wrath. He sailed the Queen Mary to fight in World War II, and was one of the first three American officers in Berlin after its fall, subsequently attending the Potsdam Conference. Upon returning to the United States, he found success in real estate and foreign investments and funded affordable housing projects from South America to Asia, all the while campaigning tirelessly for independent journalism and limited government at home. McEnaney presents an intimate, humanizing portrait of an individual who could very often seem larger than life and offers readers a story of American progress, devotion to family, and a drive for success.

Maura McEnaney is an award-winning business writer and editor with more than 30 years of experience. A former journalist at Bloomberg News and the Akron Beacon Journal, her work has appeared in the Boston Globe, the New York Daily News, and the Washington Post, among other publications. She was a staff writer on the Akron Beacon Journal’s “A Question of Color,” a year-long project examining race relations in Akron, which won the Pulitzer Prize Gold Medal for Meritorious Service. She has been a close friend of the Garvey family for more than two decades.

“Willard Garvey is, yes, great fun to read! What a saga; Garvey defines the term ‘larger than life.’ It is a wonderful story of a tireless pioneer and entrepreneur who carried the torch for free markets and freedom to innovate all around the world—overcoming obstacles which would have made any reasonable person turn tail and run like hell. In these confusing times, it is a tale that will both entertain and, better yet, inspire. Willard Garvey has renewed my spirits.” —Tom Peters, bestselling author of Thriving on Chaos, Liberation Management, In Search of Excellence (with Robert Waterman, Jr.), The Circle of Innovation and other books

“Willard Garvey was a long-time friend and supporter. As the wonderful book Willard Garvey shows, he was a man of action who could never sit still very long because he had so many projects that required his attention. As his friends and family will attest, men like Willard don’t come along very often. I was honored to play a small part in his life.” —Robert J. Dole, former Majority Leader, United States Senate

“Willard and Jean Garvey were a joy to be around, lots of laughs during the many Chief Executives Organization trips my wife Stevie and I traveled with them. As so well discussed in the fabulous book Willard Garvey, Willard was a clever, astute businessman who enjoyed the interaction with the various businesses and entities in which he was involved. His work ethic and integrity earned him a well-deserved reputation for fairness. He was a generous and caring man, and we were proud to be counted among his friends. Spending time with the Garveys was something we looked forward to at every opportunity. I feel especially complimented to have known them and I strongly encourage others to read this inspiring book.” —Karl Eller, Chairman and Chief Executive Officer, The Eller Companies; former Chairman and Chief Executive Officer, Circle K Corporation

“As superbly presented in the book Willard Garvey, Willard was an innovator and a risk-taker, unafraid of failure or the lessons it could teach. As this compelling biography demonstr ates, he was a man with the courage of his convictions—a trait our country so desperately needs at the present hour.” —Charles G. Koch, Chairman of the Board and Chief Executive Officer, Koch Industries, Inc.

“The superb book Willard Garvey vividly shows that Willard was a man of many hats – involvements. He was a man who made a difference in the world, and he was a family man to both his family and his employees.” —Gary L. Bengochea, President, Nevada First Corporation

“My friend Willard Garvey was a major unsung hero of the cause of liberty, the conservative movement and limited government. As accurately revealed in the fabulous book Willard Garvey, Willard was a leader who mostly operated under the public’s radar quietly helping to change American public policy and laying the foundation for today’s conservative movement and Tea Parties. All who love liberty and freedom under God’s laws are deeply in his debt.” —Richard A. Viguerie, Chairman, ConservativeHQ.com; Chairman, American Target Advertising, Inc.; Founder and Publisher, Conservative Digest