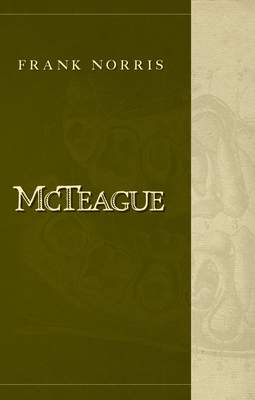 First published in 1899, this graphic depiction of urban American life centers around McTeague, a "dentist" practicing in San Francisco at the turn of the century. While at first content with his life and friendship with an ambitious man named Marcus, McTeague eventually courts and marries Trina, a parsimonious young woman who wins a large sum of money in a lottery. It is not long before the jealousy and avarice of the majority of the characters in the novel sets off a chain of inevitable and increasingly horrific events. Norris' work, so strikingly different from that of his contemporaries, is an admirable example of social realism, which provided America with a shocking reflection of its sordid sense of survival. From the opening description of San Francisco to McTeague's final desperate flight far from his 'Dental Parlors, ' this novel examines human greed in a way that still causes readers to pause and reflect.

Frank Norris is the author of McTeague: A Story of San Francisco, The Octopus: A Story of California, The Pit, and Vandover and the Brute. He was a popular Progressive era novelist and naturalist who died a young, underrated master of American fiction. Jonathan Evison is the New York Times bestselling author of The Revised Fundamentals of Caregiving, West of Here, and All About Lulu. He is the recipient of the 2012 Pacific Northwest Booksellers Association Award, the 2012 Booklist Editor's Choice Award, and the 2008 Washington State Book Award. He lives on an island in Washington.