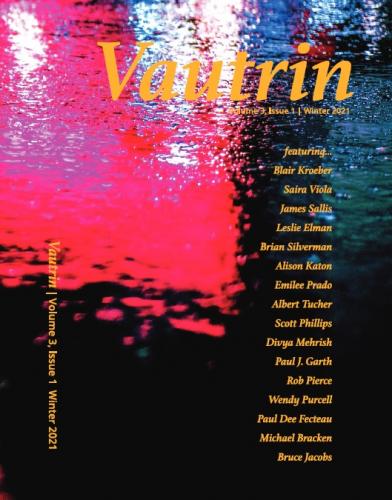 
On Our Shelves Now
Life, liberty… chicanery, survival and revenge. Jefferson would have put that in, but they couldn’t get funding for a magazine. So they made it a declaration instead.

Down in the basement where we keep the Vautrin press, all manner of pamphlets and propaganda infiltrate the collective unconscious. The Winter 2021 issue is laced with agendas and hidden messages. The goal has always been to make millions. Retire early. It’s the same for any literary endeavor.

Saira Viola | Monkey Fizz
Kat Sloane could do with a shot of cash.

Alison Katon | Godspeed
Megan just wanted to get away, up highway 41 to Green Bay.

Leslie Elman | The Troll Was An Old Man
The women at this funeral have a little something in common.

Scott Phillips | War Eagle
Creeping around a boxcar, checking for bulls. Excerpt from a work-in-progress.

Rob Pierce | China, My China
What kind of people go on a dig?

Divya Mehrish | Crimson
In which Carys ponders her regrets.