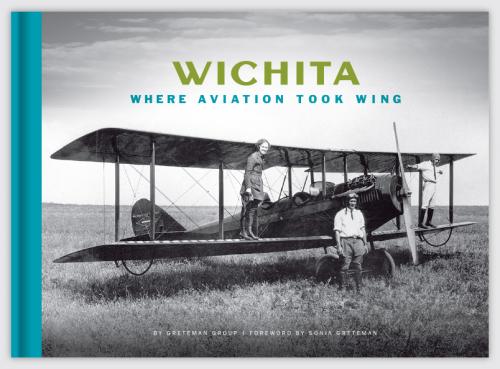 By The Greteman Group, Sonia Greteman (Introduction By)
$39.99
On Our Shelves Now

This book commemorates Wichita’s role as Air Capital of the World. It takes readers from the early birds and barnstormers to the pioneers and entrepreneurs who established dozens of aircraft and associated factories in the 1920s. The story continues with the founding of Cessna, Beechcraft and Stearman (which became Boeing Wichita, then Spirit
AeroSystems) and the massive build-up during World War II. Robust post-war growth got another boost when Bill Lear came to town and launched the business jet revolution with his Learjet. Today Wichita remains at the center of global aviation design and manufacturing with Textron Aviation, Spirit AeroSystems, Bombardier Learjet, Airbus and many dozens of smaller aviation manufacturers, suppliers and support organizations.

What made Wichita the Air Capital? Flat prairies resembled one enormous landing field. Southwesterly winds added extra thrust to get and stay aloft. Farming and small manufacturing provided a legion of imaginative, industrious problem-solvers. Local boosters latched onto and promoted anything that flew. The city’s central location provided an ideal refueling stop for coast-to-coast airmail routes. And oil generated a class of savvy, starry-eyed entrepreneurs who both used aircraft and had money to invest. Wichita brought it all together. The people. The promise. The planes.

On Sept. 2, 1911, Albin Longren became the first person to build _and_ fly an airplane in Kansas. His pusher-type biplane lifted off from a hayfield with a four-gallon gas tank and “flight instruments” that consisted of a pocket watch and barometer. The first plane built in Wichita rolled out of production in 1917, when Clyde Cessna assembled his Comet. Wichita’s first commercial aircraft, the Swallow, came from the E.M. Laird Airplane Co. in 1920. By 1928, Wichita was general aviation’s manufacturing grand central, producing 120 airplanes a week – a quarter of all U.S. output. A Chamber of Commerce Air Capital logo contest celebrated the city’s 16 aircraft manufacturers, six aircraft engine factories, 11 airports and dozen flying schools. Wichita produces more airplanes – almost 300,000 to date – and offers more skilled aviation workers than any other city. Aviation forms Wichita’s heritage and future.