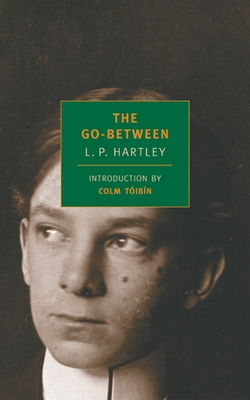 
On Our Shelves Now
"The past is a foreign country: they do things differently there."

Summering with a fellow schoolboy on a great English estate, Leo, the hero of L. P. Hartley's finest novel, encounters a world of unimagined luxury. But when his friend's beautiful older sister enlists him as the unwitting messenger in her illicit love affair, the aftershocks will be felt for years. The inspiration for the brilliant Joseph Losey/Harold Pinter film starring Julie Christie and Alan Bates, The Go-Between is a masterpiece—a richly layered, spellbinding story about past and present, naiveté and knowledge, and the mysteries of the human heart. This volume includes, for the first time ever in North America, Hartley's own introduction to the novel.
L.P. Hartley (1895–1972), the son of the director of a brickworks, attended Harrow and Balliol College, Oxford, before setting out on a career as a literary critic and writer of short stories. In 1944 he published his first novel, The Shrimp and the Anemone, the opening volume of the trilogy Eustace and Hilda. In the spring of 1952, Hartley began The Go-Between, a novel strongly rooted in his childhood. By October he had already completed the first draft, and the finished product was published in early 1953. The Go-Between became an immediate critical and popular success and has long been considered Hartley’s finest book. His many other novels include Facial Justice, The Hireling, and The Love-Adept.

Colm Tóibín is the author of six novels, including The Master (a novel based on the life of Henry James) and Brooklyn, and two collections of stories, Mothers and Sons and The Empty Family. He has been a visiting writer at Stanford, the University of Texas at Austin, and Princeton, and is now Mellon Professor in the Humanities at Columbia University.

"Exuding such a sense of summer the pages might be warm to touch, Hartley's coming-of-age tale is set during the heatwave of 1900. It all ends in tears, but not before there have been plenty of cucumber sandwiches on the lawn." —The Observer

"The first time I read it, it cleared a haunting little spot in my memory, sort of like an embassy to my own foreign country. . . . I don't want to spoil the suspense of a well-made plot, because you must read this, but let's just say it goes really badly and the messenger (shockingly) gets blamed. Or he blames himself anyway. And here the mirror cracks; the boy who leaves Brandham is not the one who came. Indeed the narrator converses with his old self as though he were two people. That was the powerful gonging left by my first read: What, if anything, bundles us through time into a single person?" —Ann Brashares, "All Things Considered," NPR

"I can't stop recommending to anyone in earshot L.P. Hartley's The Go-Between. . . . One of the fabled opening lines in modern literature: 'The past is a foreign country: They do things differently there.' The NYRB paperback has a superb new introduction by Colm Tóibín, but don't read it until after you've read the book itself." —Frank Rich, New York Magazine