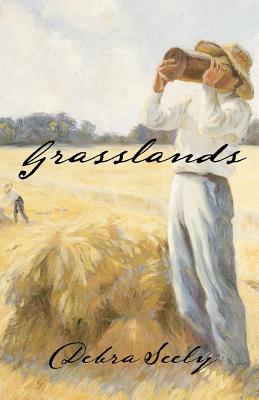 Thirteen-year-old Thomas Hunter dreams of the cowboy life on the prairie. When he finally makes the long train ride from Virginia to Kansas to rejoin his father, Thomas discovers a hardscrabble existence of farming and plates licked clean. One day, a sudden cattle stampede finally gives hiim the opportunity to "go cowboy." Can Thomas prove his mettle and find solace in this harsh land?

Grasslands received the Society of Midland Authors Award for Juvenile Fiction in 2003 and the nomination for the William Allen White Award in 2004. Thomas Hunter's story continues in The Last of the Roundup Boys.

Debra Seely is a life-long, fourth-generation Kansan. Her two historical fiction novels for adolescents, Grasslands and its companion book The Last of the Roundup Boys, are based on family stories from the early days of Kansas. Grasslands received the Society of Midland Authors Award for Juvenile Fiction in 2003 and the nomination for the William Allen White Award in 2004. Seely received her MFA in Creative Writing from Wichita State University. She has taught English and Children's Literature at the junior high, high school, and university levels. She now writes full time and works with children in schools. She is married with three grown children.
"Seely's evocative writing has a flair for the vivid simile and seamlessly weaves a wealth of information about the prairie into... an excellent coming-of-age story and a must for collections on prairies, cowboy life, and westward expansion after the Civil War." - Kirkus Reviews (starred review)