As Texas Goes...: How the Lone Star State Hijacked the American Agenda (Paperback) 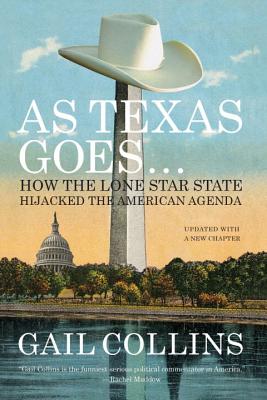 “Gail Collins is the funniest serious political commentator in America. Reading As Texas Goes… is pure pleasure from page one.” —Rachel Maddow

A Kirkus Reviews Best Book of the Year (Nonfiction)

As Texas Goes . . . provides a trenchant yet often hilarious look into American politics and the disproportional influence of Texas, which has become the model for not just the Tea Party but also the Republican Party. Now with an expanded introduction and a new concluding chapter that will assess the influence of the Texas way of thinking on the 2012 election, Collins shows how the presidential race devolved into a clash between the so-called “empty places” and the crowded places that became a central theme in her book. The expanded edition will also feature more examples of the Texas style, such as Governor Rick Perry’s nearsighted refusal to accept federal Medicaid funding as well as the proposed ban on teaching “critical thinking” in the classroom. As Texas Goes . . . will prove to be even more relevant to American politics by the dawn of a new political era in January 2013.

Gail Collins, the best-selling author of When Everything Changed: The Amazing Journey of American Women from 1960 to the Present, is a national columnist for the New York Times. She lives in New York City.

The reader who senses a touch of sarcasm would not be wrong…[Collins] has a good eye for absurd details.
— Erica Grieder

There is no one like Gail Collins: uproarious fun on every page, but with a serious point. In this wonderful book she devastates Texas for its hypocrisy, its ignorance, its worship of wealth. But you cannot keep laughing as she shows how the Texan mind works a baleful influence on the rest of the country.
— Anthony Lewis

Starred review. New York Times political columnist Collins zeroes in on what makes Texas so important and why the rest of the country needs to know and care about what’s happening there…A timely portrait of Texas delivered with Collins’ unique brand of insightful humor.


[Collins] set off on a whirlwind tour to discover the Lone Star State and its transcendent meaning, deploying a breezy, wisecracking polemical style familiar to fans (including me) of her twice-­weekly column in The Times.

New York Times columnist Gail Collins makes a compelling case in As Texas Goes… that much of what ails the nation began down in the Lone Star State.