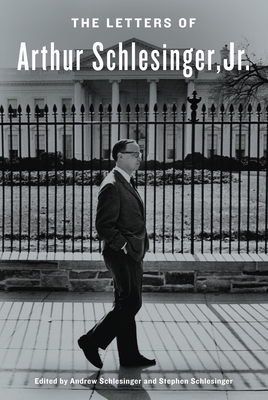 This extraordinary collection gathers the never-before-seen correspondence of a true American original—the acclaimed historian and lion of the liberal establishment, Arthur Schlesinger, Jr.

The Letters of Arthur Schlesinger, Jr. reveals the late historian’s unvarnished views on the great issues and personalities of his time, from the dawn of the Cold War to the aftermath of September 11. Here is Schlesinger’s correspondence with such icons of American statecraft as Harry Truman, Adlai Stevenson, Hubert Humphrey, Henry Kissinger, Bill Clinton, and, of course, John and Robert Kennedy (including a detailed critique of JFK’s manuscript for Profiles in Courage). There are letters to friends and confidants such as Eleanor Roosevelt, John Kenneth Galbraith, Gore Vidal, William Styron, and Jacqueline Kennedy (to whom Schlesinger sends his handwritten condolences in the hours after her husband’s assassination), and exchanges with such unlikely pen pals as Groucho Marx, Sammy Davis, Jr., and Bianca Jagger. Finally, there are Schlesinger’s many thoughtful replies to the inquiries of ordinary citizens, in which he offers his observations on influences, issues of the day, and the craft of writing history.

Written with the range and insight that made Schlesinger an indispensable figure, these letters reflect the evolution of his thought—and of American liberalism—from the 1940s to the first decade of the new millennium. Whether he is arguing against the merits of preemptive war, advocating for a more forceful policy on civil rights, or simply explaining his preference in neckwear (“For sloppy eaters bow ties are a godsend”), Schlesinger reveals himself as a formidable debater and consummate wit who reveled in rhetorical combat. To a detractor who accuses him of being a Communist sympathizer, he writes: “If your letter was the product of sincere misunderstanding, the facts I have cited should relieve your mind. If not, I can only commend you to the nearest psychiatrist.” Elsewhere, he castigates a future Speaker of the House, John Boehner, for misattributing quotations to Abraham Lincoln.

Combining a political strategist’s understanding of the present moment with a historian’s awareness that the eyes of posterity were always watching him, Arthur Schlesinger, Jr., helped shape the course of an era with these letters. This landmark collection frames the remarkable dynamism of the twentieth-century and ensures that Schlesinger’s legacy will continue to influence this one.

Praise for The Letters of Arthur Schlesinger, Jr.

“Schlesinger’s political intelligence in his correspondence is excellent, the level of discourse and purpose high, the sense of responsibility as keen as the sense of fun. . . . The best letters—and there are many—come from the typewriter of the public Schlesinger, the fighting liberal, especially when he’s jousting with a provocative antagonist.”—George Packer, The New York Times Book Review

“Arthur Schlesinger’s letters are full of personal, political, and historical insights into the tumultuous events and enormous personalities that dominated the mid-twentieth century.”—President Bill Clinton

Arthur Schlesinger, Jr. (1917–2007) was an American historian and social critic whose work explored the American liberalism of political leaders including Franklin D. Roosevelt, John F. Kennedy, and Robert F. Kennedy. Schlesinger served as special assistant to President Kennedy from 1961 to 1963. He wrote a detailed account of the Kennedy administration, from the transition period to the president’s state funeral, titled A Thousand Days, for which he won the Pulitzer Prize. The author of more than nineteen books, he won a second Pulitzer in 1946 for his book The Age of Jackson.

Andrew Schlesinger is the author of Veritas: Harvard College and the American Experience and co-editor with his brother Stephen of Journals: 1952–2000 by Arthur M. Schlesinger, Jr. In 1980, he joined ABC News in its documentary division, where his film scripts won two Emmy awards and a Writers Guild Award. He lives in Cambridge, Massachusetts.

Stephen Schlesinger was director of the World Policy Institute at the New School from 1997 to 2006, and publisher of the quarterly magazine the World Policy Journal. After editing and publishing The New Democrat Magazine, he became a staff writer at Time, then served as a speechwriter and foreign policy advisor to Governor Mario Cuomo. He is the author of Act of Creation: The Founding of The United Nations (a Harry S. Truman Book Award winner), and The New Reformers, and co-author of Bitter Fruit: The Story of the American Coup in Guatemala. He is a contributor to magazines, newspapers, and web sites, including The Washington Post, the Los Angeles Times, The Nation, The New York Observer, and The Huffington Post.

“Schlesinger’s political intelligence in his correspondence is excellent, the level of discourse and purpose high, the sense of responsibility as keen as the sense of fun. . . . The best letters—and there are many—come from the typewriter of the public Schlesinger, the fighting liberal, especially when he’s jousting with a provocative antagonist.”—George Packer, The New York Times Book Review

“Arthur Schlesinger’s letters are full of personal, political, and historical insights into the tumultuous events and enormous personalities that dominated the mid-twentieth century. Because he viewed them up close but with a historian’s perspective, The Letters of Arthur Schlesinger, Jr. helps us all to more fully understand recent history.”—President Bill Clinton

“Spanning more than five decades, Arthur Schlesinger’s letters to friends and acquaintances in the highest echelons of mid-twentieth-century political and intellectual life are vivid, candid, witty, and brilliantly written. The Letters of Arthur Schlesinger, Jr., is an important contribution to history and, one hopes, may even revive the lost art of letter writing.”—Henry Kissinger

“At a time when letter writing has become a lost art, Arthur Schlesinger’s letters are a welcome reminder of how appealing and how revealing of an era this form can be. Schlesinger's letters are a national treasure that deserve a large audience.”—Robert Dallek

“Arthur Schlesinger, Jr. was a masterful historian, a fighting liberal, and a fully engaged citizen—that much we’ve always known. But this book establishes him as one of the liveliest letter writers of his time, as well. These pages are filled with vivid personalities, strong opinions, shrewd assessments, and half-forgotten battles brought back to life. No one who wants to understand how it was to live through the second half of the twentieth century in America should miss it.”—Geoffrey C. Ward

“Here’s an amazing book of letters large and small written by a man whose brilliance has long been appreciated, beginning with Eleanor Roosevelt, Adlai Stevenson, John Kennedy and all the Kennedys thereafter, and with this book shall continue to be honored. I am one of the lucky ones whose friendship with Arthur Schlesinger kept me aware of the fact that time and thoughtfulness belong to us all, and that age and intellect do not guarantee us a free ride. As you enter his world, all I can say is: Read on to uncover and discover what life is all about.”—Lauren Bacall

“An insightful, unique view of the multiple Pulitzer–winning liberal icon Arthur Schlesinger, Jr. . . . A treasure trove that enriches understanding of some of the men and women who helped shape events from World War II to the present.”—Kirkus Reviews (starred review)

“Fascinating . . . Schlesinger was . . . a prolific writer of letters—around 35,000—whose extraordinarily wide range of correspondents included fellow intellectuals, literary figures and many high government officials, such as his longtime friends Hubert Humphrey and Henry Kissinger. . . . His sons, Andrew and Stephen, have gone through this treasure trove to select the letters that best articulated his essential beliefs and captured the movement of his times. The result is the thoroughly engaging and enlightening The Letters of Arthur Schlesinger, Jr., most of which have never before been seen by the public.”—BookPage