The Museum of Unconditional Surrender (Paperback) 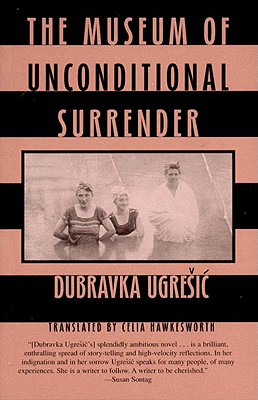 By Dubravka Ugresic, Celia Hawkesworth (Translated by)
$18.95
On Our Shelves Now

The Museum of Unconditional Surrender—by the renowned Yugoslavian writer Dubravka Ugresic—begins in the Berlin Zoo, with the contents of Roland the Walrus's stomach displayed beside his pool (Roland died in August, 1961). These objects—a cigarette lighter, lollipop sticks, a beer-bottle opener, etc.—like the fictional pieces of the novel itself, are seemingly random at first, but eventually coalesce, meaningfully and poetically.

Written in a variety of literary forms, The Museum of Unconditional Surrender captures the shattered world of a life in exile. Some chapters re-create the daily journal of the narrator's lonely and alienated mother, who shops at the improvised flea-markets in town and longs for her children; another is a dream-like narrative in which a circle of women friends are visited by an angel. There are reflections and accounts of the Holocaust and the Yugoslav Civil War; portraits of European artists; a recipe for Caraway Soup; a moving story of a romantic encounter the narrator has in Lisbon; descriptions of family photographs; memories of the small town in which Ugresic was raised.

Addressing the themes of art and history, aging and loss, The Museum is a haunting and an extremely original novel. In the words of the Times Literary Supplement, "it is vivid in its denunciation of destructive forces and in its evocation of what is at stake."

Dubravka Ugresic is the author of several works of fiction, including The Museum of Unconditional Surrender and Fording the Stream of Consciousness, and three collections of essays, Have a Nice Day, The Culture of Lies, and most recently Thank You for Not Reading. She has received several international prizes for her writing, including the Swiss Charles Veillon European Essay Prize, the Austrian State Prize for European Literature, and most recently the Premio Feronio-Citta di Fiano. Born and raised in the former Yugoslavia, she left her homeland in 1993 for political reasons and currently lives in Amsterdam.

Celia Hawkesworth was Senior Lecturer in Serbian and Croatian at the School of Slavonic and East European Studies, University College, London until her retirement. She has published numerous articles and several books on Serbian, Croatian and Bosnian literature, including a study Ivo Andric: Bridge between East and West, and Voices in the Shadows: Women and Verbal Art in Serbia and Bosnia. She has also published numerous translations, including several works by Ivo Andric and Dubravka Ugresic.