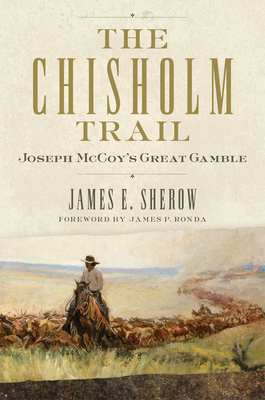 
One hundred fifty years ago the McCoy brothers of Springfield, Illinois, bet their fortunes on Abilene, Kansas, then just a slapdash way station. Instead of an endless horizon of prairie grasses, they saw a bustling outlet for hundreds of thousands of Texas Longhorns coming up the Chisholm Trail--and the youngest brother, Joseph, saw how a middleman could become wealthy in the process. This is the story of how that gamble paid off, transforming the cattle trade and, with it, the American landscape and diet. The Chisholm Trail follows McCoy's vision and the effects of the Chisholm Trail from post-Civil War Texas and Kansas to the multimillion-dollar beef industry that remade the Great Plains, the American diet, and the national and international beef trade. At every step, both nature and humanity put roadblocks in McCoy's way. Texas cattle fever had dampened the appetite for longhorns, while prairie fires, thunderstorms, blizzards, droughts, and floods roiled the land. Unscrupulous railroad managers, stiff competition from other brokers, Indians who resented the usurping of their grasslands, and farmers who preferred growing wheat to raising cattle all threatened to impede the McCoys' vision for the trail. As author James E. Sherow shows, by confronting these obstacles, McCoy put his own stamp upon the land, and on eating habits as far away as New York City and London. Joseph McCoy's enterprise forged links between cattlemen, entrepreneurs, and restaurateurs; between ecology, disease, and technology; and between local, national, and international markets. Tracing these connections, The Chisholm Trail shows in vivid terms how a gamble made in the face of uncontrollable natural factors indelibly changed the environment, reshaped the Kansas prairie into the nation's stockyard, and transformed Plains Indian hunting grounds into the hub of a domestic farm culture.