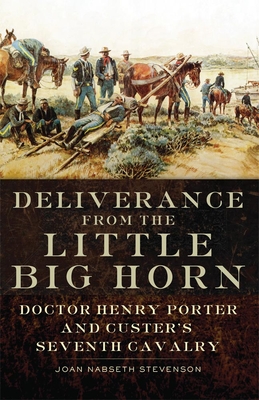 Of the three surgeons who accompanied Custer's Seventh Cavalry on June 25, 1876, only the youngest, twenty-eight-year-old Henry Porter, survived that day's ordeal, riding through a gauntlet of Indian attackers and up the steep bluffs to Major Marcus Reno's hilltop position. But the story of Dr. Porter's wartime exploits goes far beyond the battle itself. In this compelling narrative of military endurance and medical ingenuity, Joan Nabseth Stevenson opens a new window on the Battle of the Little Big Horn by re-creating the desperate struggle for survival during the fight and in its wake.
As Stevenson recounts in gripping detail, Porter's life-saving work on the battlefield began immediately, as he assumed the care of nearly sixty soldiers and two Indian scouts, attending to wounds and performing surgeries and amputations. He evacuated the critically wounded soldiers on mules and hand litters, embarking on a hazardous trek of fifteen miles that required two river crossings, the scaling of a steep cliff, and a treacherous descent into the safety of the steamboat Far West, waiting at the mouth of the Little Big Horn River. There began a harrowing 700-mile journey along the Yellowstone and Missouri Rivers to the post hospital at Fort Abraham Lincoln near Bismarck, Dakota Territory.
With its new insights into the role and function of the army medical corps and the evolution of battlefield medicine, this unusual book will take its place both as a contribution to the history of the Great Sioux War and alongside such vivid historical novels as Son of the Morning Star and Little Big Man. It will also ensure that the selfless deeds of a lone "contract" surgeon--unrecognized to this day by the U.S. government--will never be forgotten.