Where Nobody Knows Your Name: Life in the Minor Leagues of Baseball (Compact Disc) 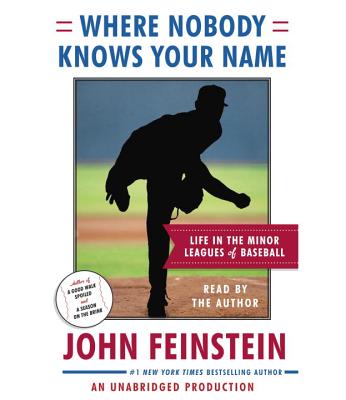 Where Nobody Knows Your Name: Life in the Minor Leagues of Baseball (Compact Disc)


Hard to Find. This book may be unable to order.
From the acclaimed #1 bestsellingauthor . . . a riveting journey through the world of minor-league baseball
No one grows up playing baseball pretending that they re pitching or hitting in Triple-A. Chris Schwinden, Triple-A pitcher
If you don t like it here, do a better job. Ron Johnson, Triple-A manager

John Feinstein gave readers an unprecedented view of the PGA Tour in A Good Walk Spoiled. He opened the door to an NCAA basketball locker room in his explosive bestseller A Season on the Brink. Now, turning his eye to our national pastime, sports journalist John Feinstein explores the colorful and mysterious world of minor-league baseball a gateway through which all major-league players pass in their careers . . . hoping never to return.
Baseball's minor leagues are a paradox. For some players, the minors are a glorious launching pad toward years of fame and fortune; for others, a crash-landing pad when injury or poor play forces a big leaguer back to a life of obscure ballparks and cramped buses instead of Fenway Park and plush charter planes. Focusing exclusively on the Triple-A level, one step beneath Major League Baseball, Feinstein introduces readers to nine unique men: three pitchers, three position players, two managers, and an umpire. Through their compelling stories, Feinstein pulls back the veil on a league that is chock-full of gifted baseball players, managers, and umpires who are all one moment away from getting called up or back to the majors.
The stories are hard to believe: a first-round draft pick and pitching ace who rocketed to major-league success before finding himself suddenly out of the game, hatching a presumptuous plan to get one more shot at the mound; a home run hitting former World Series hero who lived the dream, then bounced among six teams before facing the prospects of an unceremonious end to his career; a big-league All-Star who, in the span of five months, went from being completely out of baseball to becoming a star in the ALDS, then signing a $10 million contract; and a well-liked designated hitter who toiled for eighteen seasons in the minors a record he never wanted to set before facing his final, highly emotional chance for a call-up to the big leagues.
From Raleigh to Pawtucket, from Lehigh Valleyto Indianapolis and beyond, Where Nobody Knows Your Name gives readers an intimate look at a baseball world not normally seen by the fans. John Feinstein gets to the heart of the human stories in a uniquely compelling way, crafting a masterful book that stands alongside his very best works.

From the Hardcover edition.

John Feinstein is a columnist for The Washington Post, Golf World and Golf Digest. He also hosts a daily radio show on the CBS Sports Radio Network; is a contributor to The Golf Channel and is an essayist for CBS Sports Television."