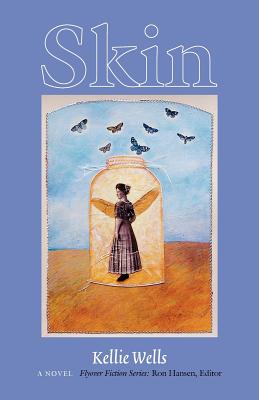 Turning loose a Midwestern species of magical realism on a small, God-haunted town in Kansas, Kellie Wells charms strangeness and wonder from what might be mistaken for “ordinary” life. Here is Martin LeFavor, convinced his father has been nabbed by a solicitous band of aliens in desperate need of skin; Charlotte McCorkle, a vexed visionary who believes she has helped her husband escape the flesh; Zero Loomis, plagued by sacrificial angels, the memory of his father, and a shadowy sexual identity; his sister Rachel, an amateur masseuse determined to settle accounts with the past, in particular with her lovingly violent father; Ruby Tuesday, Rachel’s daughter, a budding oracle, the embodiment of possibility and prey to history; and, holding this tilted cosmos together, fifteen-year-old Ivy Engel, who carefully measures the borders of Self, advocates for neighborhood bats, and frets about the health of her friend Duncan, his harrowed body mapped and perhaps ravaged by subcutaneous scars.
What happens when the spirit exceeds the limits of the skin? More troubling yet, what happens if it doesn’t? These are the questions the inhabitants of What Cheer, Kansas, must finally face as their paths cross and recross in an ever more intriguing—and perhaps liberating—puzzle.

Kellie Wells is an assistant professor of English at Washington University in St. Louis. Her collection of short fiction, Compression Scars, won the 2001 Flannery O’Connor Award from the University of Georgia Press and the 2003 Great Lakes Colleges Association New Writers Award.

"Kellie Wells unleashes the clamorous, resistless, marvelous voice of our world's collective unconscious, the language of ecstasy and despair in all its manifold registers. Reading Skin is like finding yourself inside one of the great medieval paintings, every last detail perfectly rendered, and exploding with celestial meaning." —Kathryn Davis, author of the novels Hell and Versailles
— Kathryn Davis

"In this surrealistic phantasmagoria, Wells writes with an intoxicating lyricism of the magic and mystery that lurk within and without the frailest and finest among us."—Booklist
— Carol Haggas

"An ambitious debut sets magical realism loose upon the staid citizens of What Cheer, Kan. . . . The mundane and the fantastical exist side by side in this small Kansas town without raising eyebrows. . . . The chapters, many of which previously appeared in literary journals, are highly detailed and exquisitely written. . . . Wells's talent suggests that she’s one to watch."—Kirkus Reviews
— Kirkus Reviews

"Wells extracts marvelous absurdity from a mundane landscape, the Kansas town of What Cheer, where obscure physical afflictions and deep existential questions weigh on a cast of neighborhood residents that includes a deacon in midlife crisis, a gay punk-rocker grasping for self-worth and a little girl with powers of divination. . . . Wells’s gift is language play. . . . She rewards effort with a fantastical story that sweetens its bite with tabloid fare: an alien abduction, angel visitations and talking cows who try to explain God."—Publishers Weekly
— Publishers Weekly

“However unbelievable the stories that make this novel are, you come away wanting to believe them. Ms Wells rightly assumes that we as readers, as people, wish to break from the constraints of ground, to shed our skin, sprout wings and fly. Within these stories she explores humanity, from the humdrum of a broken septic tank spilling effluvium into a backyard, to the weighty issues of death when a child watches a man executed on television—all this, the ylem that became us is found in these pages, mystical and strange and held together by our skin.” —Diagram
— Diagram