Leonardo and the Last Supper (Hardcover) 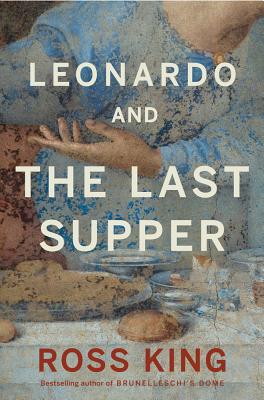 Early in 1495, Leonardo da Vinci began work in Milan on what would become one of history's most influential and beloved works of art-"The Last Supper." After a dozen years at the court of Lodovico Sforza, the Duke of Milan, Leonardo was at a low point personally and professionally: at forty-three, in an era when he had almost reached the average life expectancy, he had failed, despite a number of prestigious commissions, to complete anything that truly fulfilled his astonishing promise. His latest failure was a giant bronze horse to honor Sforza's father: His 75 tons of bronze had been expropriated to be turned into cannons to help repel a French invasion of Italy. The commission to paint "The Last Supper "in the refectory of a Dominican convent was a small compensation, and his odds of completing it were not promising: Not only had he never worked on a painting of such a large size-15' high x 30' wide-but he had no experience in the extremely difficult medium of fresco.

In his compelling new book, Ross King explores how-amid war and the political and religious turmoil around him, and beset by his own insecurities and frustrations-Leonardo created the masterpiece that would forever define him. King unveils dozens of stories that are embedded in the painting. Examining who served as the models for the Apostles, he makes a unique claim: that Leonardo modeled two of them on himself. Reviewing Leonardo's religious beliefs, King paints a much more complex picture than the received wisdom that he was a heretic. The food that Leonardo, a famous vegetarian, placed on the table reveals as much as do the numerous hand gestures of those at Christ's banquet.

As King explains, many of the myths that have grown up around "The Last Supper "are wrong, but its true story is ever more interesting. Bringing to life a fascinating period in European history, Ross King presents an original portrait of one of the world's greatest geniuses through the lens of his most famous work.

Ross King is the highly praised author of Brunelleschi's Dome (the Book Sense Nonfiction Book of the Year in 2000), Michelangelo and the Pope's Ceiling (on the New York Times extended bestseller list), The Judgment of Paris, Machiavelli: Philosopher of Power, and two novels, Ex Libris and Domino. He lives outside Oxford in England.

“King gives us a gripping account of how that painting was created...[and] deftly situates the painting in a historical context… [a] fascinating volume.”—Michiko Kakutani, The New York Times “[A] lively history.”—The New Yorker
“The story of Leonardo’s creation of the work has now found an ideal chronicler in Ross King, author of Brunelleschi’s Dome and Michelangelo and the Pope’s Ceiling, which have won plaudits for their concise, close-focus study of great renaissance achievements. King has the gift of clear, unpretentious exposition, and an instinctive narrative flair” —Charles Nicholl, Guardian “Leonardo and the Last Supper is meticulously researched, gracefully written and fascinating to read.”—The Cleveland Plain Dealer “Ross King, an English novelist and historian, tells the story, in Leonardo and the Last Supper, of the improbable creation of one of art's greatest masterpieces. With a fiction writer's feel for character, King depicts a supremely ingenious, enigmatic, stubbornly independent, and underachieving Leonardo, and, with a nonfiction writer's skill, he sets the sketch against a richly described background of a society in creative and often violent ferment.” —Philadelphia Inquirer  "King brings to precise life a fully dimensional, irresistibly audacious, and wizardly Leonardo and his powerfully affecting, miraculously surviving mural. Readers will love the dramatic, vivid, and brainy mix of biography and art history King cooks up” – Booklist, starred review

“King provides a fascinating look at the artist’s life, including his reputation among his patrons as unreliable, and his relationships with those he worked with and for—including a young boy named Giacomo, who ‘held a great physical attraction for Leonardo.’ However, King’s speculations are never salacious; rather, they help place Leonardo’s life into the context of Florence’s history of sexual tolerance and subsequent religious crackdowns…the book proves most lively when tackling common misconceptions about the painting, with The Da Vinci Code coming in for special criticism.” – Publishers Weekly

“An absorbing study of a disappearing masterpiece…King places the painting in its political, social and artistic context, describing both the meaning of da Vinci’s work and the violent 15th-century Italian world that spawned it…King plumbs the painting’s religious, secular, psychological and political meanings, registered in the facial expressions and hand positions, the significance of the food on the table and, most fascinatingly, the salt spilled by the betraying Judas…King’s book is an impressive work of restoration—the author helps readers see this painting for the first time.” – Kirkus Review, starred

“A fascinating and in-depth story of one of the world’s most famous works of art that will appeal to general readers as well as academics. Highly recommended.” – Library Journal, starred review
“The colorful back story is restored and revealed in Leonardo and The Last Supper, a new book by British author Ross King that quickly dispenses with the outlandish myths spread by The Da Vinci Code novel — while showing that history is in many ways more surprising than Dan Brown’s popular fiction.” – New York Post

"The story of Leonardo's creation has now found an ideal chronicler in Ross King, author of Brunelleschi's Dome and Michelangelo and the Pope's Ceiling, which have won plaudits for their concise, close-focus study of great renaissance achievements. Clear, unpretentious exposition."  – The Guardian