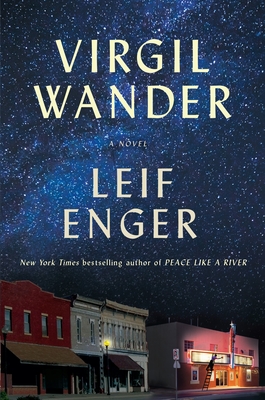 Reading Leif Enger feels like settling in to hear an old friend tell you an amazing and engaging story. With his authentic, conversational voice, Enger returns to the same quirky and whimsical Midwestern characters who made his first novel PEACE LIKE A RIVER so endearing. These people are familiar--even if you've never actually known an owner of a fading, small-town theater, the eponymous Virgil Wander, who almost burns down his home and business in his concussed state after accidentally driving his car off a cliff. Or a one-game wonder of a minor league pitcher who disappears on a small plane, leaving behind his beautiful wife and son. There's mystery and magic, fish tales and kite flying. The situations in the novel may be unusual, but the characters' reactions are not. Enger's explorations of loss and rebirth get to the heart of what makes us all human. VIRGIL WANDER is a transformative delight.

Greenstone, Minnesota is a quirky little town, teetering on the brink. In a perfect world, it might very well exist... If you are lucky enough to find yourself lost in the mist from Lake Superior. And let's face it, sometimes we only truly find ourselves when we are quite lost. Which brings us to Virgil Wander.

Virgil wakes up in a concussed state. He was pulled from his car after it slid over a snowy ledge and dove straight into the lake. Virgil remembers very little, including himself, whom he refers to as "the previous tenant". He's lost his bearings and a few other fairly important things, like his purpose and balance. And adjectives.

Virgil owns the town's old movie theater, The Empress. The old dame is past her prime and fading fast. He is determined to bring her back to life, while likewise restoring himself. The cast of characters in Greenstone outshine those on the big screen. You'll meet an arctic kite flier who "calls upon the wind like a take-out pizza", and a man-eating sturgeon. But the true stars of this tale are the words. Those dazzling adjectives that come to life and sing. (I have a notepad to prove it, having copied phrases too perfect to leave behind.) Virgil's quest to rebuild his life and his hard luck town, is part homespun yarn and part magic. Every character is pitch perfect and oddly familiar. I fell in love over and over... with the man and the town.

“From the fated flight of Virgil Wander’s Pontiac into the frigid waters of Lake Superior to an encounter with Rune, an enigmatic kite enthusiast searching for word of a long-lost son, and other interactions with the citizens of Greenstone, Minnesota, Leif Enger’s new novel is a most welcome, albeit quirky, story of words and people lost and found. Lovers of Peace Like a River, rejoice! Enger is back with another enchanting and enriching tale of community and revival, with his ever-deft touch of magic and grace. A perfect remedy for those whose hearts ache from our present reality, Virgil Wanderis a treasure to be shared with all readers.”
— Mark Nichols, Bank Square Books, Mystic, CT

The first novel in ten years from award-winning, million-copy bestselling author Leif Enger, Virgil Wander is an enchanting and timeless all-American story that follows the inhabitants of a small Midwestern town in their quest to revive its flagging heart Midwestern movie house owner Virgil Wander is "cruising along at medium altitude" when his car flies off the road into icy Lake Superior. Virgil survives but his language and memory are altered and he emerges into a world no longer familiar to him. Awakening in this new life, Virgil begins to piece together his personal history and the lore of his broken town, with the help of a cast of affable and curious locals--from Rune, a twinkling, pipe-smoking, kite-flying stranger investigating the mystery of his disappeared son; to Nadine, the reserved, enchanting wife of the vanished man, to Tom, a journalist and Virgil's oldest friend; and various members of the Pea family who must confront tragedies of their own. Into this community returns a shimmering prodigal son who may hold the key to reviving their town. With intelligent humor and captivating whimsy, Leif Enger conjures a remarkable portrait of a region and its residents, who, for reasons of choice or circumstance, never made it out of their defunct industrial district. Carried aloft by quotidian pleasures including movies, fishing, necking in parked cars, playing baseball and falling in love, Virgil Wander is a swift, full journey into the heart and heartache of an often overlooked American Upper Midwest by a "formidably gifted" (Chicago Tribune) master storyteller.