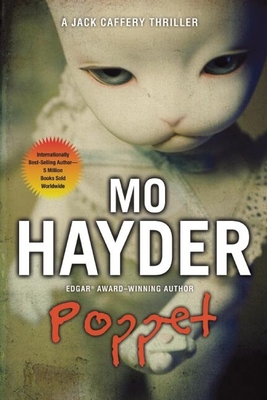 By Mo Hayder
Email or call for price
Out of Print - Contact us to order used copies.

Mo Hayder has for years been a master of chilling, seamlessly-plotted thrillers that keep the reader glued to the page long after lights out, and fresh off of winning the Edgar Award for Best Novel for Gone, Hayder is at the top of her game. Her latest novel, Poppet, is Hayder at her most terrifying: a gripping novel about the search for a dangerous mental patient on the loose. Everything goes according to procedure when a patient, Isaac, is released into the community from a high security mental health ward. But when the staff realize that he was connected to a series of unexplained episodes of self-harm amongst the ward's patients, and furthermore that he was released in error, they call on Detective Jack Caffery to investigate, and to track Isaac down before he can kill again. Will the terrifying little effigies Isaac made explain the incidents around the ward, or provide the clue Caffery needs to predict what he's got planned? Mo Hayder is renowned for conjuring nightmares that sink under the skin, and in Poppet she has delivered a taut, unbearably suspenseful novel that will not let readers go.

Mo Hayder has worked as a filmmaker, Tokyo nightclub hostess, and English language teacher. She is the winner of the Edgar(R) Award for Best Novel for Gone and the 2011 Crime Writers' Association Dagger in the Library award for outstanding body of work. She is also the author of Birdman, The Treatment, The Devil of Nanking, Pig Island, Ritual, Skin, and Hanging Hill. She lives in England.

Praise for Poppet
"If there’s anything better than being poleaxed by a book, it’s turning to the also by this author” page and seeing EIGHT previous books to dive into, including one Edgar winner. Mo Hayder knows what’s scary." --The Charlotte Observer