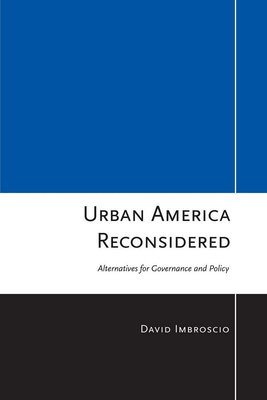 The aftermath of Hurricane Katrina laid bare the tragedy of American cities. What the storm revealed about the social conditions in New Orleans shocked many Americans. Even more shocking is how widespread these conditions are throughout much of urban America. Plagued by ineffectual and inegalitarian governance, acute social problems such as extreme poverty, and social and economic injustice, many American cities suffer a fate similar to that of New Orleans before and after the hurricane. Gentrification and corporate redevelopment schemes merely distract from this disturbing reality. Compounding this tragedy is a failure in urban analysis and scholarship.Little has been offered in the way of solving urban America's problems, and much of what has been proposed or practiced remains profoundly misguided, in David Imbroscio's view. In Urban America Reconsidered, he offers a timely response. He urges a reconsideration of the two reigning orthodoxies in urban studies: regime theory, which provides an understanding of governance in cities, and liberal expansionism, which advocates regional policies linking cities to surrounding suburbs. Declaring both approaches to be insufficient--and sometimes harmful--Imbroscio illuminates another path for urban America: remaking city economies via an array of local economic alternative development strategies (or LEADS).Notable LEADS include efforts to build community-based development institutions, worker-owned firms, publicly controlled businesses, and webs of interdependent entrepreneurial enterprises. Equally notable is the innovative use of urban development tools to generate indigenous, stable, and balanced growth in local economies. Urban America Reconsidered makes a strong case for the LEADS approach for constructing progressive urban regimes and addressing America's deepest urban problems.

David Imbroscio is Professor of Political Science at the University of Louisville. He is author of Reconstructing City Politics: Alternative Economic Development and Urban Regimes, coauthor of Making a Place for Community: Local Democracy in a Global Era, and coeditor of Theories of Urban Politics, second edition, and Critical Urban Studies: New Directions.