On Heaven and Earth: Pope Francis on Faith, Family, and the Church in the Twenty-First Century (Hardcover) 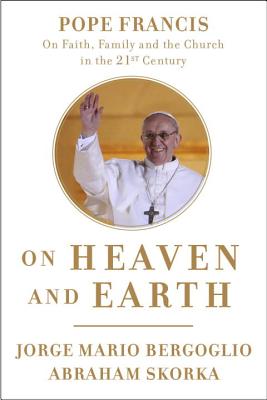 New York Times Bestseller
From the man who became Pope Francis, Jorge Mario Bergoglio shares his thoughts on religion, reason, and the challenges the world faces in the 21st century with Abraham Skorka, a rabbi and biophysicist.

For years Cardinal Jorge Mario Bergoglio, archbishop of Argentina, and Rabbi Abraham Skorka were tenacious promoters of interreligious dialogues on faith and reason. They both sought to build bridges among Catholicism, Judaism, and the world at large. On Heaven and Earth, originally published in Argentina in 2010, brings together a series of these conversations where both men talked about various theological and worldly issues, including God, fundamentalism, atheism, abortion, homosexuality, euthanasia, same-sex marriage, and globalization. From these personal and accessible talks comes a first-hand view of the man who would become pope to 1.2 billion Catholics around the world in March 2013.

JORGE MARIO BERGOGLIO, POPE FRANCIS, is the first Latin American to be elected to the chair of Peter. A native of Buenos Aires, Argentina, he was ordained as a priest in 1969. He served as head of the Society of Jesus in Argentina from 1973 to 1979. In 1998 he became the archbishop of Buenos Aires, and in 2001 a cardinal. Following the resignation of his predecessor, Pope Benedict XVI, February 28, 2013, the conclave elected Bergoglio, who chose the papal name Francis in honor of Saint Francis of Assisi. He is the first pope to be a Jesuit, to come from the Americas, and to come from the Southern Hemisphere. ABRAHAM SKORKA is an Argentine rabbi, biophysicist, and book author. He is rector of the Seminario Rabinico Latinoamericano in Buenos Aires, the rabbi of the Jewish community Benei Tikva, a professor of biblical and rabbinic literature at the Seminario Rabinico Latinoamericano, and honorary professor of Hebrew law at the University of Salamanca.

This remarkable book wonderfully demonstrates the warm and positive relationship Pope Francis has developed with Jews and Judaism. These honest and respectful exchanges between then-Cardinal Jorge Bergoglio and Argentinian Rabbi Abraham Skorka on a wide range of sensitive and complex topics - God, religion, fundamentalism, politics, and the Holocaust - is a model not only for Jews and Catholics but for all those seeking productive interfaith dialogue in helping to repair a broken world. -- Rabbi Eric J. Greenberg, Director, Department of Interfaith Affairs Anti-Defamation League

Whether or not they agree with everything that is said, readers of all religious backgrounds will be impressed by the substance and frankness of these conversations between Cardinal Bergolio and Rabbi Skorka. They clearly enact the call of the Second Vatican Council for "fraternal dialogues"  between Catholics and Jews. This is how religious leaders should speak to one another: on the basis of sincere friendship and respect.  This book will also encourage anyone who wondered if a pope from a non-European country could be personally committed to the Catholic Church's new relationship with Jews. --Philip A. Cunningham, Ph.D., Professor of Theology and Director of the Institute for Jewish-Catholic Relations, Saint Joseph's University, Philadelphia