The Princess in Black Takes a Vacation (Hardcover) 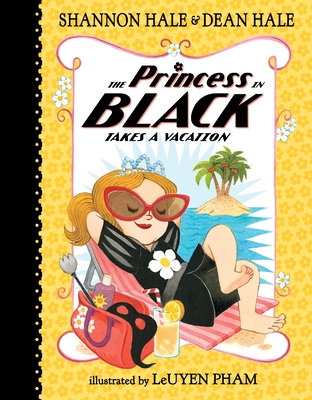 The Princess in Black Takes a Vacation (Hardcover)

This is book number 4 in the Princess in Black series.

Even monster-battling princesses get tired sometimes! But a peaceful time away is hard to find as the humorous New York Times best-selling series continues.

After battling monsters all night, a sleepy Princess in Black decides that she needs a vacation. After all, the Goat Avenger, a new hero who looks oddly familiar, has offered to protect the goats while she takes a much needed break. The very next day Princess Magnolia rides her bicycle to the seaside, where the air is salty, the sun is shiny, and the sea is as blue as monster fur. But just as Princess Magnolia is about to take a nap on her hammock, she hears a “ROAR!” Seriously? A monster? On the perfect beach? Impossible! Could a sea monster really ruin this vacation for the Princess in Black?
Shannon Hale and Dean Hale are the award-winning husband-and-wife team behind the Princess in Black series, illustrated by LeUyen Pham. Shannon Hale is also the author of the Newbery Honor novel Princess Academy as well as the New York Times best-selling series Ever After High. Shannon Hale and Dean Hale live in Salt Lake City, Utah.

LeUyen Pham is the illustrator of many books for children, including God’s Dream by Archbishop Desmond Tutu and Douglas Carlton Abrams and Aunt Mary’s Rose by Douglas Wood. LeUyen Pham lives in California.
The dual storylines keep the pace exciting, and—even though the heroine is sleepy—the art is energetic and charming. Princess Magnolia has fair skin, Duff's is a little bit darker, and the beachgoers are pleasingly diverse. As always, hilarious; perhaps the strongest Princess in Black outing since the first.
—Kirkus Reviews

Pham’s expressive artwork appears on almost every page, effectively breaking up the text for emerging readers, as well as helping them to visualize the story details. Particularly amusing are the paired illustrations that compare the Goat Avenger and Duff. Recommend the PIB series to Kate DiCamillo’s Mercy Watson graduates looking for a new fix.
—Booklist Online