The True Tale of the Monster Billy Dean (Hardcover) 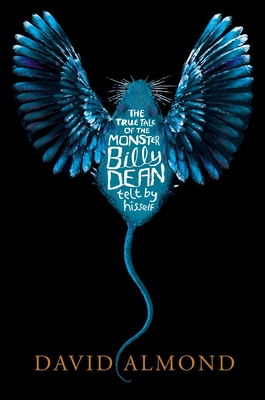 From master storyteller David Almond comes a gripping, exquisitely written novel about a hidden-away child who emerges into a broken world.

Billy Dean is a secret child. He has a beautiful young mother and a father who arrives at night carrying the scents of candles and incense and cigarettes. Birds fly to his window. Mice run out from his walls. His world is a carpet, a bed, pictures of the holy island, and a single locked door. His father fills his mind and his dreams with mysterious tales and memories and dreadful warnings. But then his father disappears, and Billy’s mother brings him out into the world at last. He learns the horrifying story of what was saved and what was destroyed on the day he was born, the day the bombers came to Blinkbonny. The kind butcher, Mr. McCaufrey, and the medium, Missus Malone, are waiting for him. He becomes The Angel Child, one who can heal the living, contact the dead, bring comfort to a troubled world. But there is one figure who is beyond healing, who comes looking for Billy himself — and is determined on a kind of reckoning.

David Almond, winner of the 2010 Hans Christian Andersen Award, is known worldwide as the multi-award-winning author of Skellig, Clay, and many other novels, stories, and plays. With Candlewick Press, he is the author of The Savage, Slog’s Dad, and Mouse Bird Snake Wolf, all illustrated by Dave McKean, among other titles. David Almond lives in England.

Billy [is] an absolutely unforgettable creation. One of the most critically acclaimed YA authors working today, Almond refuses to rest on his laurels, and here he delivers his finest book in years.
—Booklist (starred review)

Skellig-creator Almond’s books are always mystical—close to the warm, dark heartbeats of man and beast—but this one, spelled mostly phonetically to show how Billy Dean might actually have written it, is perhaps even more raw, sensuous and savage. Dark, unsettling and fluid as water, Almond’s suspenseful tour de force considers the cycle of life, themes of war, God and godlessness, and, as ever, “How all things flow into each other.”
—Kirkus Reviews (starred review)

[A] mesmerizing post-apocalyptic tale... [T]he novel speaks feelingly to the love between parent and child, as well as the harm parents can do.
—Publishers Weekly (starred review)

Billy's ability to find surreal beauty in strange things, such as the dead mice he lovingly dissects in his room, hearkens back to Almond’s treatment of Skellig and Heaven Eyes, and the message is also similar: wonder and loveliness can be recovered from the ashes of the festering evil. Billy’s innocence doesn’t save him from that evil, but his steadfast ability to find goodness, beauty, love, and mystery in the darkest places lights the way forward, for himself and readers alike.
—Bulletin of the Center for Children's Books

Almond’s earthy mysticism is made especially potent by uneducated Billy’s eccentric, phonetic spelling and poetic imagination. “The pensil wanders across the payper lyk a little beest creepin hoaplesly across the rubbl,” he writes of trying to shape the narrative of his own life—a story filled with Roman Catholic imagery, violence, affection, sorrow for the dead, and a profound, appreciative wonder for nature. Rich, dense, and memorable.
—The Horn Book

Like many of David Almond's novels, his latest dark masterpiece transcends the everyday world to exist in a mystical landscape all its own. ... The author challenges his readers with phonetic spellings, which, along with a deft use of magical realism, build a world that—like so many that Almond creates—is both darker and more wondrous than our own.
—Shelf Awareness for Readers

Darkly gripping and rife with foreboding. ... A dense and chilling read, it will appeal to older teens who liked "The Sound and the Fury" by William Faulkner and "Room" by Emma Donoghue.
—The Horn Book

Like many Almond books, this is magical, mystical, mysterious, and meaningful.
—Library Media Connection

[A] postapocalyptic, psychological novel... The compelling story is told from Billy’s point of view and with the language and phonetic spelling of a child whose development has been stunted by his lifelong imprisonment.
—School Library Journal