What Would Brian Boitano Make?: Fresh and Fun Recipes for Sharing with Family and Friends (Hardcover) 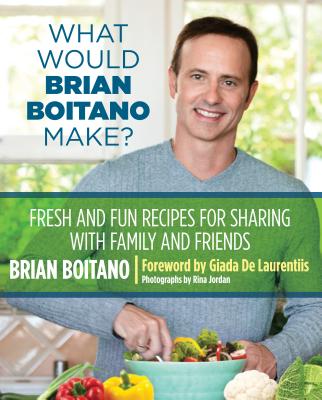 Brian Boitano has traveled all over the world for skating competitions, and he is fascinated with other cultures and their cuisine. He now finds the same deep fulfillment in cooking and entertaining that he once found in skating. His adventures abroad influence his own style of cooking, as does his Italian heritage, where great food has always been a key part of any gathering. Some of Boitano's favorite food memories revolve around family get-togethers, and his cookbook includes personal vignettes and dishes that are inspired by memorable family recipes. The recipes in What Would Brian Boitano Make? emphasize taste, convenience, and nutrition. Boitano pairs intriguing flavors and textures, playing with the balance of opposites to add complexity to his recipes. While gourmet in taste, the ingredients are easily accessible to any home cook. Mouthwatering recipes include: Paella Sliders, Crab-and-Avocado Crostini, Blood Orange Mojito, Butternut Squash Soup with Goat Cheese Toasts, Heirloom Tomato Cantaloupe and Feta Salad, Summer Squash Risotto with Grilled Lemon Basil Chicken, Pork Tenderloin with Warm Plum Salsa, Salmon with Pea and Basil Pesto, and Coconut Flan.

Brian Boitano is more than just a champion on the ice; he also gives a winning performance in the kitchen. His Food Network series, What Would Brian Boitano Make?, premiered in August 2009 and is now on the Cooking Channel. On the air, Brian demonstrates his culinary skills and talent for one-of-a-kind entertaining. With a lifelong passion for food and cooking, Brian hosts unpredictable get-togethers at his San Francisco home and creates menus that focus on innovative but accessible dishes. Few athletes have enjoyed the artistic and popular success that Brian has since winning the gold medal for the United States at the 1988 Winter Olympics Games in Calgary, Canada. He created and routinely performs his signature jump, the Tano Triple, so difficult it has rarely been completed by anyone else. In competitions and exhibitions, Brian continues to raise the level of skating to new heights. After turning professional in 1988, he won six world professional titles, placing first and scoring perfect 10s in each of ten consecutive championships. As a professional, he won the first 20 out of the 24 competitions he entered, a record unmatched in the history of skating. Brian has won more professional titles than any other skater in the history of the sport; among those titles are six World Professional Championships. Brian won a primetime Emmy Award, television's highest honor, for his starring role in the 1990 HBO movie Carmen on Ice. In 1992, he and fellow Olympic gold medalist Katarina Witt toured North America in three successful ice shows: Skating, Skating II and Skating '92, which were broadcast on network television. In 1994, he starred in Nutcracker on Ice with Oksana Baiul and Viktor Petrenko. For 15 years, he toured with Champions On Ice around the country, headlining 25 national tours. Brian has provided expert commentary on televised skating shows for ABC, NBC and Turner networks.Brian is a three-time Olympian and has won more than 50 titles, including 23 international gold medals, two World titles, two Pro/AM titles, 16 professional titles, four U.S. National titles, as well as the Olympic Gold Medal. He has been inducted into the World Figure Skating Hall of Fame, the U.S. Figure Skating Hall of Fame, and the National Italian-American Hall of Fame. In 1998, Brian founded Youth Skate, a non-profit organization that introduces San Francisco's inner-city youth to the sport of ice skating.