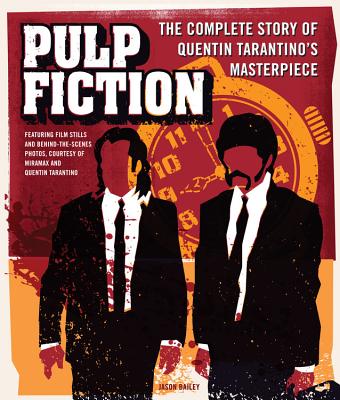 By Jason Bailey
$38.50
Out of Print - Contact us to order used copies.

When Pulp Fiction was released in theaters in 1994, it was immediately hailed as a masterpiece. The New York Times called it a "triumphant, cleverly disorienting journey," and thirty-one-year-old Quentin Tarantino, with just three feature films to his name, became a sensation: the next great American director. Nearly twenty years later, those who proclaimed Pulp Fiction an instant classic have been proven irrefutably right. In Pulp Fiction: The Complete Story of Quentin Tarantino's Masterpiece, film expert Jason Bailey explores why Pulp Fiction is such a brilliant and influential film. He discusses how the movie was revolutionary in its use of dialogue ("You can get a steak here, daddy-o," "Correct-amundo"), time structure, and cinematography--and how it completely transformed the industry and artistry of independent cinema. He examines Tarantino's influences, illuminates the film's pop culture references, and describes its phenomenal legacy. Unforgettable characters like Jules Winnfield (Samuel L. Jackson), Vincent Vega (John Travolta), Butch Coolidge (Bruce Willis), and Mia Wallace (Uma Thurman) are scrutinized from all-new angles, and memorable scenes--Christopher Walken's gold watch monologue, Vince's explanation of French cuisine--are analyzed and celebrated. Much like the contents of Marcellus Wallace's briefcase, Pulp Fiction is mysterious and spectacular. Illustrated throughout with original art inspired by the film, with sidebars and special features on everything from casting close calls to deleted scenes, this is the most comprehensive, in-depth book on Pulp Fiction ever published.

Jason Bailey is the film editor for Flavorwire, and his writing has appeared in The Atlantic, Slate, Salon, and the Village Voice. He is the author of Voyageur Press' Pulp Fiction: The Complete Story of Quentin Tarantino's Masterpiece (2013) and The Complete Woody Allen: Everything You Always Wanted to Know About Woody Allen Movies * But Were Afraid to Ask (2014). Bailey has also done stints in TV news and video stores in addition to writing and directing eleven feature films in his hometown of Wichita, Kansas. He now lives in New York with his Rebekah, where he sees too many movies and tweets too much (@jasondashbailey).http://twitter.com/jasondashbailey

`the Pulp Fiction of Pulp Fiction books. With its dynamic deployment of guest essays, infographics and fan art, the contents are as varied as those in the film, and proof of Pulp's continuing influence. an accessible volume that doesn't stint on insight, with a particularly astute reading of Tarantino's shot choices. Crucially, Bailey's tone - colloquial without dumbing down, stimulating without being bogged down in academic jargon - is as one with Tarantino's cool vernacular. The ideal "tasty beverage" to help wash down your next rewatch.'

"Illustrated with Pulp Fiction-inspired artwork, the tome also includes behind-the-scenes photos and movie stills as well as features on the origin story, the casting process, deleted scenes, and the film's impact on critics and audiences alike." - Entertainment Weekly

"Who would've thought a book could outdo any DVD or interactive video assemblage on a film or filmmaker? VERDICT: Recommended" - Library Journal

"Who would've thought a book could outdo any DVD or interactive video assemblage on a film or filmmaker? Bailey (film editor, Flavorwire) not only culls the complete story of Quentin Tarantino's most influential work (arguably his masterpiece) but does so with visual panache and verbal wit and style using Tarantino techniques such as nonlinear structure, cutaways, and enlightening reveals. The book provides an immersive treasure trove of illusory and original photos, posters, maps, and infographics, thereby making local and linear the film's nonchronological order. There are album covers, product labels, pulp film posters, and book jackets, not to mention guest essays (on music, pulp novels, the F-word, and blaxploitation). Even those who are not fans of Tarantino must acknowledge that cinema has never been the same since Pulp Fiction, with its eccentric characters, deadpan violence, Rashomon-like revisitations of scene and perspective, metamovie commentary, and small-talk dialog?"and Bailey eruditely reveals why. In the same manner as Q.T., he makes us more cinematically aware and intelligent viewers in the process. VERDICT Recommended for students, cinephiles, geeks, fans, and marketing reps/graphic designers (for the great designs and effective visual narrative devices used)." - Library Journal