The Great British Bake Off: Get Baking for Friends and Family (Hardcover) 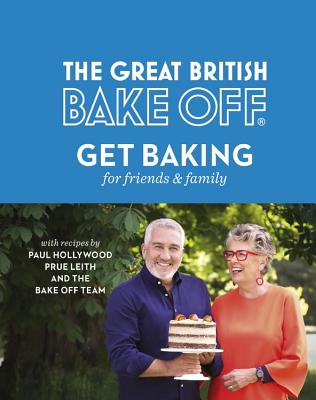 The Great British Bake Off: Get Baking for Friends and Family (Hardcover)

By Paul Hollywood, Prue Leith, The Bake Off Team


Hard to Find. This book may be unable to order.
THE BRAND-NEW OFFICIAL GBBO BOOK, FEATURING RECIPES FROM THE NEW SERIES

From children's birthdays and charity bake sales to celebrating with a loved one or simply enjoying sweet treat over a cup of tea and a catch-up with a dear friend, Get Baking for Friends & Family is a celebration of all those shared moments: both in the joy of making and in the simple pleasure of indulging in something really delicious.

The Great British Bake Off: Get Baking for Friends & Family will encourage and empower amateur bakers of all abilities to have a go at home, taking inspiration from The Great British Bake Off's most ambitious bakes but with simplified recipes and straightforward instructions that will enable even complete beginners to impress their nearest and dearest.

Featuring more than 100 beautifully photographed sweet and savory bakes, with recipes from Paul Hollywood, Prue Leith and the series 8 and 9 bakers.

Paul Hollywood started his training as a baker aged twelve and then went to art college and trained as a sculptor. The love of working with his hands finally led him into creating new, unique and specialty breads full-time. He has worked as Head Baker at several renowned hotels and is the founder of the Hollywood Company Deli, which supplies his own breads to top London restaurants and supermarkets.

Paul has recently appeared as a guest on 8 Out of 10 Cats, Lorraine and The Jonathan Ross Show. He has been a judge on The Great British Bake Off since 2010 as well as hosting his own BBC shows Paul Hollywood's Bread and Paul Hollywood's Pies & Puds.