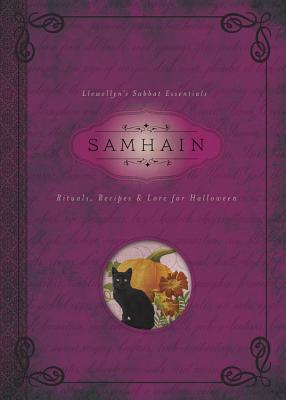 Samhain--also known as Halloween--is the final spoke in the Wheel of the Year. At this time, the harvest has finished and the veil between the worlds is at its thinnest. This guide shows you how to practice the serious work of divination and honoring the dead along with the more lighthearted activities of Halloween.

Llewellyn's Sabbat Essentials explore the old and new ways of celebrating the seasonal rites that are the cornerstones of the witch's year.

Llewellyn Publications has grown and expanded into new areas of personal growth and transformation since it began as the Portland School of Astrology in 1901. Along with the strong line of astrology books the company was founded upon, Llewellyn publishes books on everything from alternative health and healing, Wicca and Paganism, to metaphysics and the paranormal-and since 1994 has published a growing list of Spanish-language titles. Llewellyn has long been know as one of America's leading publishers of New Age books, producing a wide variety of valuable tools for transformation of the mind, body and spirit. Reach for the Moon-and discover that self-help and spiritual growth is what Llewellyn is all about.Diana Rajchel began her career planning to serve as clergy and write about all subjects spiritual. It did not occur to her or anyone else to say with what agency she might assume priesthood. The result of this oversight in intention setting is that she is now an itinerant city priestess, well-practiced witch, and somewhat unintentional subversive. Her background includes Wicca, folk witchcraft, conjure, and a whole lot of experience organizing people that don't like knowing that they're organized. Diana splits her time between San Francisco, California, where she co-owns Golden Apple Metaphysical, and southwestern Michigan, where she runs Earth and Sun spiritual coaching with her partner. In between her wanderings she teaches as part of the Magick 101 series for Wicked Grounds Annex in San Francisco, and teaches and reads tarot at Elements Kalamazoo in Michigan. Diana has 25 years' experience as a professional tarot reader and western herbalist and has 29 years' experience as a professional writer. She is also the pet DragonCat to a very ladylike boxer named Nora.