Hater: On the Virtues of Utter Disagreeability (Hardcover) 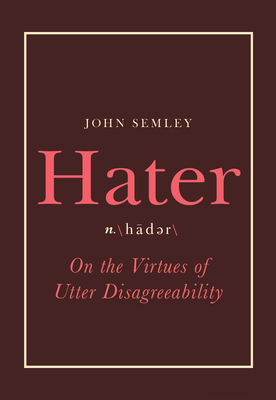 A timely manifesto urging us to think critically, form opinions, and then argue them with gusto.

Hater begins from a simple premise: that it's good to hate things. Not people or groups or benign belief systems, but things. More to the point, it's good to hate the things everyone seems to like.
Scan the click-baiting headlines of your favorite news or pop-culture website and you're likely to find that just about everything is, supposedly, "what we need right now." We are the victims of an unbridled, unearned optimism. And our world demands pessimism. It's vital to be contrarian--now, as they say, more than ever. Because ours is an age of calcified consensus. And we should all hate that.
In this scathing and funny rebuke of the status quo, journalist John Semley illustrates that looking for and identifying nonsense isn't just a useful exercise for society, it's also a lot of fun. But Hater doesn't just skewer terrible TV shows and hit songs--at its core it shows us how to meaningfully talk about and engage with culture, and the world. Ultimately, Hater is what we actually need right now.

JOHN SEMLEY is a pop culture and media critic who regularly writes arts features and reviews. He is a film and TV columnist for CBC's q, and frequent contributor to The Globe and Mail and Maclean's. His work has appeared in The New York Times Magazine, Esquire, The A.V. Club, Salon, Now, The Walrus, Toronto Life, and more. He is the author of This Is a Book About Kids in the Hall. He lives in Toronto.

“[A] reminder that contrarian opinions can motivate us to think about what we’re consuming and what we’re taking for granted.” —Radheyan Simonpillai, NOW magazine

“Well-argued and warmly rendered … an unmistakable call for a new scepticism, a disciplined interrogation of one's own ideas and courage to express them despite the crushing pressures of conformity or indifference.” —Brent Bambury, CBC’s Day 6

“In this clarion call to turn down the suck, John Semley turns up the good. Do hate the player, do hate the game, and do read Hater to do so decently." —Benjamin Errett, author of Elements of Wit

“In an age where pop-culture opinions are evenly sorted between rigid agreement and insubstantial trolling, John Semley makes a fierce case for the dying art of informed criticism. Hater is necessary reading for the modern misanthrope.” —Andray Domise, Maclean’s Contributing Editor

“Defying the relentless pressure to stay positive, John Semley stands up for the righteous cause and dying art of ruthless critique. From predictable commodified culture to phony corrupt politics, there’s a lot to dislike these days. This is a scathing guidebook to hating in good faith.” —Astra Taylor, Writer and Filmmaker

Like a lot of manifestos, [Hater is] also a passionate broadside, a clarion call to wake the sheeple from their slumbers… the message of a book like Hater is more important than ever.” —Literary Review of Canada