Prairie Bachelor: The Story of a Kansas Homesteader and the Populist Movement (Hardcover) 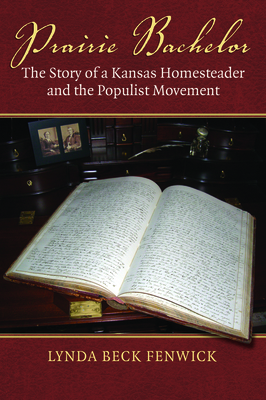 By Lynda Beck Fenwick
$55.00
Available to order! Usually Ships to Store in 3-5 Days.

The People's Party, the most successful third party in America's history, emerged from the Populist Movement of the late 1800s. And of the People's Party, there was perhaps no more exemplary proponent than homesteader Isaac Beckley Werner of Stafford County, Kansas. Very much a man of his community, Werner contributed columns to the County Capital and other Kansas newspapers, spoke at the county seat, regularly attended Populist lectures, and--most fortunately for posterity--from 1884 until a few years before his death in 1895, kept a journal reporting on the world around him and noting the advice of Henry Ward Beecher. With this journal as a starting point, Isaac Beckley Werner, prairie bachelor, becomes an eloquent guide to the practical, social, and political realities of rural life in late nineteenth-century Kansas. In this portrait Lynda Beck Fenwick finds the Populist thinking that would eventually take hold in numerous ways, big and small, in American life--and would make a mark the imprint of which can be seen in the nation's political culture to this day. Expanding her search to local cemeteries, courthouses, museums, and fields where homesteaders once staked their claims, Fenwick reveals a farming community much denser than today's, where Prohibition, women's rights, and income inequality were shared concerns, and where enduring problems, like substance abuse, immigration, and racial bias, made an early appearance. The Populist Movement both arose from and focused upon these issues, as Werner's journal demonstrates; and in his world of farmers, small-town businessmen, engaged women, and working people, Fenwick's Prairie Bachelor shows us the provenance and lived reality of a rural populism that would forever alter the American political scene.