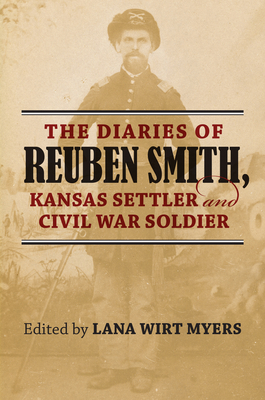 In 1854, after recently arriving from England, twenty-two-year-old Reuben Smith traveled west, eventually making his way to Kansas Territory. There he found himself in the midst of a bloody prelude to the Civil War, as Free Staters and defenders of slavery battled to stake their claim. The young Englishman wrote down what he witnessed in a diary where he had already begun documenting his days in a clear and candid fashion. As beautifully written as they are keenly observant, these diaries afford an unusual view of America in its most tumultuous times, of Kansas in its critical historical moments, and of one man's life in the middle of it all for fifty years. From his moving account of traveling from England by ship to his reflections on settling in the newly opened Kansas Territory to his observations of war and politics, Smith provides a picture that is at once panoramic and highly personal. His diaries depict the escalation of the Civil War along the Kansas-Missouri border as well as the evolution of a volunteer soldier from an inexperienced private to a seasoned officer and government spy. They take us inside military camps and generals' quarters, to the front lines of battle and in pursuit of bushwhackers William Quantrill and Cole Younger. Later, they show us Smith as a state representative and steward of the Kansas State Insane Asylum in its early years. In historic scenes and poignant personal stories, these diaries offer a unique perspective on life in the Midwest in the last half of the nineteenth century. Editor Lana Wirt Myers's commentary and extensive notes provide the context and information needed for a full understanding of Reuben Smith's remarkable stories.