Elevations: A Personal Exploration of the Arkansas River (Hardcover) 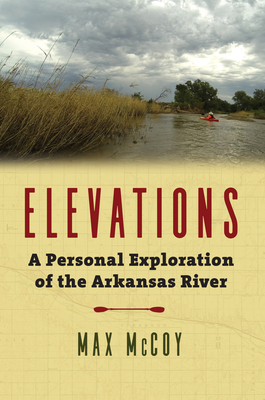 The upper Arkansas River courses through the heart of America from its headwaters near the Continental Divide above Leadville, Colorado, to Arkansas City, just above the Kansas-Oklahoma border. Max McCoy embarked on a trip of 742 miles in search of the river's unique story. Part adventure and part reflection, steeped in the natural and cultural history of the Arkansas Valley, Elevations is McCoy's account of that journey. Going by kayak when he can--by Jeep, on foot, or by other means when he has to--McCoy takes us with him, navigating the Arkansas River as it reveals its nature and tests his own. Along the way, and when he isn't battling the current for his overturned kayak; braving a frigid Christmas Eve along the river; or joining the search for a drowning victim, he steps out to explore the world beyond the river's banks. Here for instance is Camp Amache, where Japanese Americans were imprisoned during World War II. Here is Ludlow, where thirteen women and children died in a standoff between striking coal miners and the militia in 1914. Farther along we find Sand Creek, site of a massacre by US soldiers in 1864, and, uncomfortably close, Garden City, where white supremacists were charged with planning a terror attack on Somali refugees in 2016. Whether traveling back in time, pausing in the present, or looking forward, Elevations captures the Arkansas River in its thrilling moments and placid stretches, in its natural splendor and degradation at human hands. The book shows us the river as a flowing repository of human history and, in the telling of this gifted writer, as a life-changing experience.