Cryptozoology A To Z: The Encyclopedia Of Loch Monsters Sasquatch Chupacabras And Other Authentic M (Paperback) 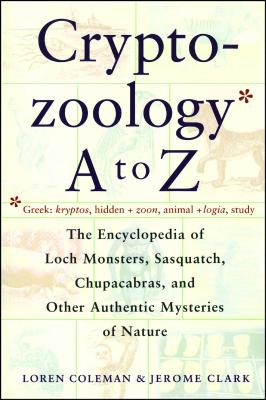 Cryptozoology A To Z: The Encyclopedia Of Loch Monsters Sasquatch Chupacabras And Other Authentic M (Paperback)


Available to order! Usually Ships to Store in 3-5 Days.
The ultimate quest for the world's most mysterious creatures.

The Loch Ness Monster, Bigfoot, the Abominable Snowman -- these are the names of the elusive beasts that have caught the eye and captured the imaginations of people around the world for centuries. Recently, tales of these "monsters" have been corroborated by an increase in sightings, and out of these legends a new science has been born: cryptozoology -- the study of hidden animals.

Cryptozoology A to Z, the first encyclopedia of its kind, contains nearly two hundred entries, including cryptids (the name given to these unusual beasts), new animal finds, and the explorers and scientists who search for them. Loren Coleman, one of the world's leading cryptozoologists, teams up with Jerome Clark, editor and author of several encyclopedias, to provide these definitive descriptions and many never-before-published drawings and photographs from eyewitnesses' detailed accounts. Full of insights into the methods of these scientists, exciting tales of discovery, and the history and evolution of this field, Cryptozoology A to Z is the most complete reference ever of the newest zoological science.
Loren Coleman, M.S.W., has researched the Copycat Effect for more than two decades. Coleman has been an adjunct professor at various universities in New England since 1980 and a senior researcher with the Muskie School for Public Policy. He is currently the primary consultant for the State of Maine's Youth Suicide Prevention Initiative. The author, coauthor, or editor of more than twenty books, including the critically acclaimed work Suicide Clusters, lives in Portland, Maine.