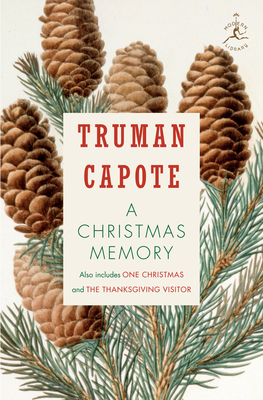 
On Our Shelves Now
A holiday classic from "one of the greatest writers and most fascinating society figures in American history" (Vanity Fair)!

First published in 1956, this much sought-after autobiographical recollection from Truman Capote (In Cold Blood; Breakfast at Tiffany's) about his rural Alabama boyhood is a perfect gift for Capote's fans young and old.

Seven-year-old Buddy inaugurates the Christmas season by crying out to his cousin, Miss Sook Falk: "It's fruitcake weather!" Thus begins an unforgettable portrait of an odd but enduring friendship and the memories the two friends share of beloved holiday rituals.

A Christmas Memory has been described as "[a] gem of a holiday story" (School Library Journal, starred review), and this warm and delicately illustrated edition is one you'll want to add to any Christmas or Capote collection.
TRUMAN CAPOTE was born in 1924 and died in 1984. Based on his own boyhood in rural Alabama in the 1930s, A Christmas Memory was orginally published in Mademoiselle in 1956 and later was included in Breakfast at Tiffany's.

BETH PECK, a designer and illustrator of many children's books, fell in love with the writing of Truman Capote and counts her paintings for A Christmas Memory and The Thanksgiving Visitor, also by Capote, among the work that is closest to her heart.