Why Priests?: A Failed Tradition (Hardcover) 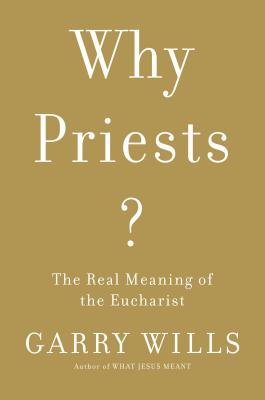 In his most provocative book yet, Pulitzer Prize winner Garry Wills asks the radical question: Why do we need priests?
Bestselling author of "Papal Sin" and "Why I Am a Catholic," Garry Wills spent five years as a young man at a Jesuit seminary and nearly became a priest himself. But after a lifetime of study and reflection, he now poses some challenging questions: Why do we need priests at all? Why did the priesthood arise in a religion that began without it and opposed it? Would Christianity be stronger without the priesthood, as it was at its outset?
Meticulously researched, persuasively argued, and certain to spark debate, "Why Priests?" asserts that the anonymous Letter to Hebrews, a late addition to the New Testament canon, helped inject the priesthood into a Christianity where it did not exist, along with such concomitants as belief in an apostolic succession, the real presence in the Eucharist, the sacrificial interpretation of the Mass, and the ransom theory of redemption. But Wills does not expect the priesthood to fade entirely away. He just reminds us that Christianity did without it in the time of Peter and Paul with notable success.
Wills concludes with a powerful statement of his own beliefs in a book that will appeal to believers and nonbelievers alike and stand for years to come as a towering achievement.

Garry Wills has written many acclaimed and bestselling works, including "What Jesus Meant," "Papal Sin," and "Why I Am a Catholic." His books have received many awards, including the Pulitzer Prize. A professor of history emeritus at Northwestern University, Wills is a frequent contributor to "The New York Review of Books "and other publications. He lives in Evanston, Illinois.

Praise for Why Priests? by Garry Wills:

“Wills draws on his expertise in classical languages and his wide reading in ecclesiastical history to argue that the Catholic/Orthodox priesthood has been one long mistake.”
—The Washington Post

“Wills sets out to persuade his fellow-Catholics that the priesthood is both unnecessary and un-Christian. . . . Wills is not attempting to break with the Church or to dismantle it. Rather, he wants to assure the faithful that they can get by without priests. ‘If we need fellowship in belief,’ he writes, ‘we have each other.’”
—The New Yorker

“How. . .did priests become dominant and then essential in Catholic Christianity? And why, Wills asks, in this provocative [and] historically rich . . . book, does the Vatican continue to sustain such falsehoods? . . . Wills’s demolition of the many myths surrounding the origins of priestly status and function is in itself crucially informative and enlightening.”
—The New Republic

“Using his linguistic skills and his impressive command of both secondary literature and patristic sources, Wills raises doubts aplenty about ‘the Melchizedek myth,’ and the priestly claims for Jesus in the ‘idiosyncratic’ Epistle to the Hebrews … His final chapter is a model of elegant simplicity, a contrast (intended or not) to the flummery often associated with his own church … ‘There is one God, and Jesus is one of his prophets,’ Wills concludes, ‘and I am one of his millions of followers.’ For those millions, scattered across time and space, that’s an affirmation worthy of celebration.”
—The New York Times Book Review

“Do we really need Catholic Priests? Wills, Pulitzer Prize winner and author of Why I Am a Catholic, dares to pose this controversial question[.] . . . One cannot help but be impressed with this brilliant work written by a scholar whose love for the Church compels him to make it better.”
—Publishers Weekly

“Wills’s . . . position is . . . original and insightful . . . [and his] task is a worthy one, namely to bring the institution of the priesthood under the gaze of historical and theological scrutiny. . . . Through his erudite scholarship and his compelling argumentation Wills has made an important contribution to this field of study and, in the process, has written a book that is thoroughly absorbing and engaging.”
—Irish Times

“[Wills] combin[es] historical and literary analysis with journalistic observations on the present Catholic church. . . . Why Priests? should be required of all seminarians.”
—National Catholic Reporter