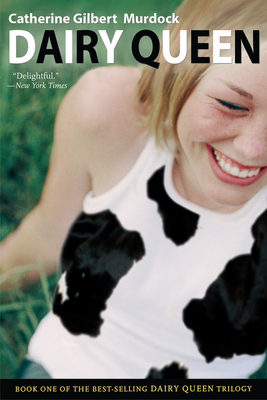 When you don’t talk, there’s a lot of stuff that ends up not getting said.
Harsh words indeed, from Brian Nelson of all people. But, D. J. can’t help admitting, maybe he’s right.

When you don’t talk, there’s a lot of stuff that ends up not getting said.
Stuff like why her best friend, Amber, isn’t so friendly anymore. Or why her little brother, Curtis, never opens his mouth. Why her mom has two jobs and a big secret. Why her college-football-star brothers won’t even call home. Why her dad would go ballistic if she tried out for the high school football team herself. And why Brian is so, so out of her league.

When you don’t talk, there’s a lot of stuff that ends up not getting said.
Welcome to the summer that fifteen-year-old D. J. Schwenk of Red Bend, Wisconsin, learns to talk, and ends up having an awful lot of stuff to say.

Catherine Murdock grew up on a small farm in Connecticut and now lives in suburban Philadelphia with her husband, two brilliant unicycling children, several cats, and a one-acre yard that she is slowly transforming into a wee, but flourishing ecosystem. She is the author of several books, including the popular Dairy Queen series starring lovable heroine D. J. Schwenk,  Princess Ben, and Wisdom's Kiss.

"Finally, a football book a girl can love. . . . With humor, sports action and intelligence abundant, this tale has something for everyone."  —Publishers Weekly, starred "A fresh teen voice, great football action and cows--this novel rocks."  —Kirkus Reviews, starred "This extremely likable narrator invites readers into her confidence and then rewards them with an engrossing tale of love, family, and football."  —Horn Book "In her debut novel, Murdock skillfully captures the messiness that comes with learning to open up to others and deal with life and love."  —Columbus Dispatch —