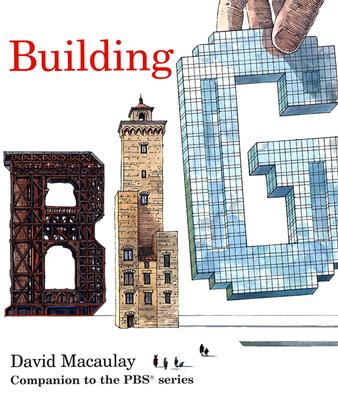 Why this shape and not that? Why steel instead of concrete or stone? Why put it here and not over there? These are the kinds of questions that David Macaulay asks himself when he observes an architectural wonder. These questions take him back to the basic process of design from which all structures begin, from the realization of a need for the structure to the struggles of the engineers and designers to map out and create the final construction.
As only he can, David Macaulay engages readers’ imaginations and gets them thinking about structures they see and use every day — bridges, tunnels, skyscrapers, domes, and dams. In Building Big he focuses on the connections between the planning and design problems and the solutions that are finally reached. Whether a structure is imposing or inspiring, he shows us that common sense and logic play just as important a part in architecture as imagination and technology do. As always, Macaulay inspires readers of all ages to look at their world in a new way.

David Macaulay is an award-winning author and illustrator whose books have sold millions of copies in the United States alone, and his work has been translated into a dozen languages. Macaulay has garnered numerous awards including the Caldecott Medal and Honor Awards, the Boston Globe–Horn Book Award, the Christopher Award, an American Institute of Architects Medal, and the Washington Post–Children’s Book Guild Nonfiction Award. In 2006, he was the recipient of a MacArthur Fellowship, given “to encourage people of outstanding talent to pursue their own creative, intellectual, and professional inclinations.” Superb design, magnificent illustrations, and clearly presented information distinguish all of his books. David Macaulay lives with his family in Vermont.