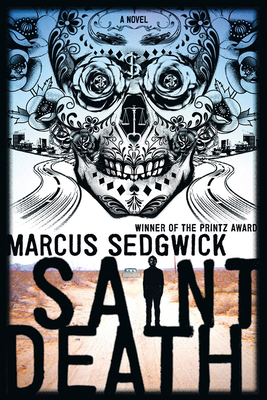 A propulsive, compelling, and unsparing novel set in the grimly violent world of the human and drug trade on the US-Mexican border

On the outskirts of Juarez, Arturo scrapes together a living working odd jobs and staying out of sight. But his friend Faustino is in trouble: he's stolen money from the narcos to smuggle his girlfriend and her baby into the US, and needs Arturo's help to get it back. To help his friend, Arturo must face the remorseless world of drug and human traffickers that surrounds him, and contend with a murky past.

Hovering over his story is the unsparing divinity Santa Muerte, Saint Death--and the relentless economic and social inequalities that haunt the border between Mexico and its rich northern neighbor. Crafted with poetry and cinematic pace and narrated with cold fury, Saint Death is a provocative tour de force from three-time Printz Award honoree Marcus Sedgwick.

"A timely but unflinching look at the distressing impact of drugs on the U.S.-Mexico border. . . . Readers will be both devastated and inspired by Arturo's devotion to Faustino and his faith in Santa Muerte." --Kirkus Reviews

"The formatting and language underscore that this is a book about Mexican characters who live their lives in Spanish--non-English words are not italicized, and dialogue is formatted according to Spanish-language conventions. This well-researched novel is an absorbing, heart-rending read and a scathing indictment of the conditions that have allowed the drug trade and human trafficking to flourish in Mexico. . . . Eerily timely and prescient, this ambitious story is a necessary purchase for all collections." --School Library Journal

"Sedgwick (Blood Red Snow White) transports readers to the border city of Juarez in this grim study of the repercussions of U.S. policies and the market for narcotics on Mexico and its citizens. . . . The novel's many tragedies feel all but inexorable, and Arturo's story will linger with readers." --Publishers Weekly

Marcus Sedgwick was born and raised in Kent in South East England, but now lives in the French Alps. His books have won and been shortlisted for many awards; most notably, he has been shortlisted for Britain's Carnegie Medal six times, has received two Printz Honors, for Revolver and Ghosts of Heaven, and in 2013 won the Printz Award for Midwinterblood.