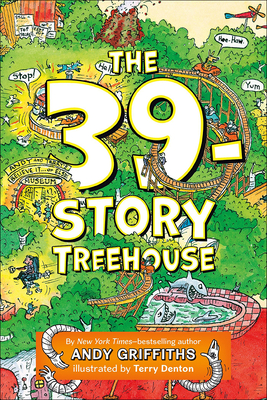 Andy and Terry are once again inviting readers to come hang out with them in their astonishing 39-story treehouse (it used to be 13 stories, then 26 stories, but they keep expanding). And this year they will have even more time to jump on the world's highest trampoline, toast marshmallows in an active volcano, swim in the chocolate waterfall, pet baby dinosaurs, and go head-to-trunk with the Trunkinator, since Terry has created the greatest invention that he or anyone else has ever invented . . . a Once-upon-a-time machine that will write and illustrate their entire book for them

Join New York Times-bestselling author Andy Griffiths and illustrator Terry Denton on another wild storytelling adventure in a series Publishers Weekly described as "Anarchic absurdity at its best." Welcome to The 39-Story Treehouse...What are you waiting for? Come on up

New York Times-bestselling author Andy Griffiths, who wrote the Treehouse series, What Body Part Is That?, Killer Koalas From Outer Space, The Big Fat Cow that Goes Kapow, The Cat on the Mat Is Flat, and The Day My Butt Went Psycho!, is at his best in these wild storytelling adventures, perfect for readers of all ages. Terry Denton has worked with Andy on many books, including the 13-Story Treehouse series and Killer Koalas From Outer Space. He lives in Australia with his wife and three kids.