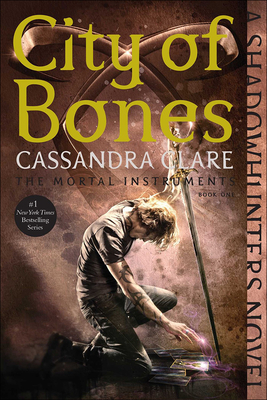 This is book number 1 in the Mortal Instruments series.

Discover the world of the Shadowhunters in the first installment of the internationally bestselling Mortal Instruments series and "prepare to be hooked" ("Entertainment Weekly")--now with a gorgeous new cover, a map, a new foreword, and exclusive bonus content "City of Bones "is a Shadowhunters novel.
When fifteen-year-old Clary Fray heads out to the Pandemonium Club in New York City, she hardly expects to witness a murder--much less a murder committed by three teenagers covered with strange tattoos and brandishing bizarre weapons. And she's more than a little startled when the body disappears into thin air. Soon Clary is introduced to the world of the Shadowhunters, a secret cadre of warriors dedicated to driving demons out of our world and back to their own. And Clary is introduced with a vengeance, when her mother disappears and Clary herself is almost killed by a grotesque monster. How could a mere human survive such an attack and kill a demon? The Shadowhunters would like to know...