I Have a Superpower (Hardcover) 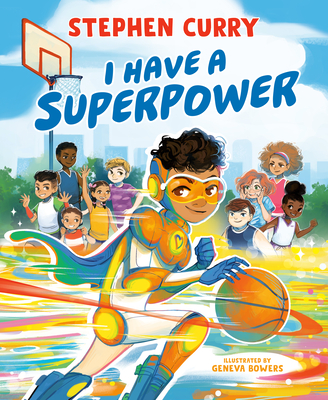 I Have a Superpower (Hardcover)


On Our Shelves Now
Four-time NBA champion and superstar Stephen Curry makes a splash with his picture book debut inspiring young readers to unlock their very own superpower.

"A positive boost from a strong role model." —Kirkus

"With accessible advice honoring commitment to craft and fortitude, this is a sporty and strong addition to growth-mindset and social-emotional-learning conversations." —Booklist


Stephen Curry’s journey to the NBA wasn’t easy. Coaches and recruiters repeatedly told him he was too small to make it in the big leagues. But Stephen used their doubts to shape his ever-positive attitude and fuel his own underdog success story. Now, Curry pens an original story to inspire the next generation of go-getters and big dreamers.

I Have a Superpower is the empowering story that teaches kids you don't have to be the strongest, fastest, or even tallest kid out on the court. So long as you have heart, any goal is achievable through hard work and determination—even without a cape!
Stephen Curry (he/him) is a four-time NBA Champion, two-time league MVP, and Finals MVP winner. He is the founder of Eat. Learn. Play., a nonprofit organization that empowers underserved children and communities across the United States. He is also the founder of Unanimous Media, a film and television company specializing in faith, family, and sports content, in tandem with Sony Studios.

Geneva Bowers (she/her) is a self-taught illustrator based in western North Carolina. She loves manipulating color and adding whimsy with a touch of realism and calm to her art.