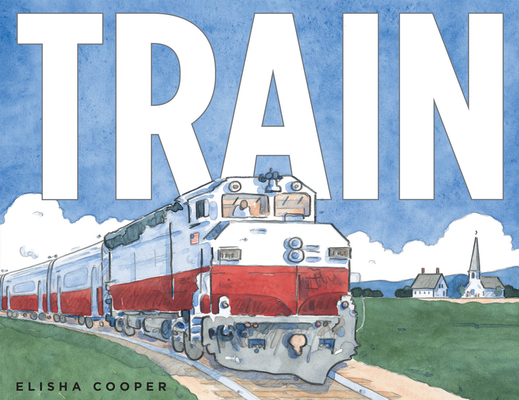 A night train, a freight train, a high-speed train. Racing across the country, from coast to coast. All aboard!
Climb aboard a red-striped Commuter Train in the East. Switch to a blue Passenger Train rolling through midwestern farmland. Then hop on a Freight Train, soar over mountains on an Overnight Train, and finish on a High-Speed Train as it races to the West Coast.

Trains are moving. Fast and loud, colorful and powerful. Experience their sights, sounds, smells--and the engineers and conductors who make them go--as they roll across the country.

Elisha Cooper is the award-winning author of Train, which received five starred reviews; Farm, which received starred reviews in Horn Book Magazine and Publishers Weekly; and Beach, which won the 2006 Society of Illustrators Gold Medal. Other picture books include A Good Night Walk, Magic Thinks Big, and Dance!, a New York Times Best Illustrated Book of the Year. Elisha Cooper lives with his family in New York City. For more information, go to elishacooper.com.

Praise for FARM
Bulletin of the Center for Children's Books Blue Ribbon Book (2010)
* "It's as thorough and pleasing an introduction to a farm as one could ask of a picture book." --THE HORN BOOK MAGAZINE, starred review
* "The graceful text and serenely stunning illustrations create a portrait both reverent and realistic." --PUBLISHERS WEEKLY, starred review

Praise for BEACH
Society of Illustrators Gold Medal (2006)
"Cooper's portrayal of a day at the shore is generous with such minutiae; his fondness for his subject is evident and infectious." --SCHOOL LIBRARY JOURNAL

Booklist Starred Review
Cooper (Homer, 2012) follows several trains going about their daily routine in this exhilerating glimpse of life on the rails. There’s the red-striped Commuter Train pulling out of the station, heading out of the concrete jungle into town after town; as the Commuter Train waits at a station, a larger Passenger Train whooshes past shuttling passengers between cities; at the rail yard next to Grand Central Station, a Freight Train loads its cargo and sloooowly pulls away; this train ambles past (“As if the train and the clouds were having a race to see which go slower”); an Overnight Train “switchbacking westward” to climb the Rocky Mountains; finally there’s the High-Speed Train, shaped like a bullet, its sleek nose pointing towards a city skyline. Throughout, there are “Passengers on, passengers off.” Cooper’s languid, rolling language works well with the looseness of the watercolors, which offer spectacular views of trains as seen from a distance, as well as interior close-ups of levers and dials. Each new train is introduced dramatically after a page turn and details of train living, like sleeping and eating on an overnight car, should thrill the intended audience. The front and back matter depicts many different people rushing to and fro, and a glossary and facts section, along with a brief author’s note, concludes. A poetic, beautifully conceived book—it has the right amount of pomp-and-circumstance to make train travel sound just a little bit glamorous.

School Library Journal Starred Review
Starting at a city terminal, Cooper takes readers on a commuter train that clatters out of a metropolis. At a suburban stop, the perspective shifts to a larger passenger train traveling between cities, jumps to a freight train slowly creeping across the Great Plains, then an overnight train, and finally a sleek high-speed train. The artist’s characteristic muted watercolor and pencil illustrations are sketchlike yet very detailed. Transitions between busy cityscapes and serene panoramic vistas, outsides of stations and insides of train cars, and the refrain of “passengers off, passengers on” perfectly capture the feeling of riding the rails. No “choo-choo” noises here–“As the train leaves, it sounds like the da dum da dum of a beating heart. Then silence.” Through the richness of the prose, not only the sounds but also the smells of the trains come to life–“grease and rust and burnt toast.” As the author’s note reveals, Cooper mixed many real-life details with a few fictional ones, such as a futuristic San Francisco depot at the end of the story. The longer text and somewhat stylized illustrations make the book most suitable for a one-on-one perusal with sophisticated young train aficionados but it is a wonderful foray into the “train books” category and a distinguished addition to most collections.

Kirkus Starred Review
Who can watch a train race by without longing to be on it? This delightful picture book delivers the literal and figurative rush of cross-country rail travel as it tracks a variety of trains, beginning with a New York commuter line and ending with a high-speed train pulling into a California terminal. Along the way, readers are treated to descriptions of the whizzing thrills of long-distance trains, including the sights, sounds and even aromas that passengers encounter inside and outside the cars. Thanks to clever narrative pacing and handsome design, children are invited to hop on for the ride. Punchy, clipped sentences, often enlivened with evocative onomatopoeic words, enhance the sense of movement. The text on the right-hand page of each spread ends in ellipses that demand rapid page turns, heightening the feel of forward momentum. The book’s rectangular shape suggests a railroad car’s appearance while also providing the illustrator ample space in which to present sweeping, panoramic views of ever-changing scenery and busy stations. The loose watercolor-and-pencil artwork hums with activity and energy; a nighttime scene is dramatic and beautiful. Cooper reminds readers of the anticipatory, ephemeral nature of rail travel by repeating the phrase “Passengers off, passengers on” and gracefully transitioning from train to train both visually and in the text. Kids will be all aboard for this one.

Publishers Weekly Starred Review
Riding the rails from New York City to San Francisco takes on an expansive definition when Cooper (Farm) sounds the “All aboard,” bringing readers on five kinds of trains (commuter, passenger, freight, overnight, and, high-speed). To move this transcontinental journey along, Cooper mostly eschews the boarding and exiting process (although he does use a stop in Chicago to portray the soaring neoclassic grandeur of a city station). Instead, he transports his audience from one train to the next as they pass (“As the Commuter Train waits, another train roars past on another track.... A bright blue Passenger Train hurrying between cities”). Cooper’s signature sun-bleached watercolors beautifully convey human achievements and nature’s grandeur through both detail and a range of scale, whether it’s an entire train passing through a rural landscape on a starry night, the control panel in the engineer’s cab, or a comparatively tiny elk. Like Brian Floca’s Locomotive, also out this month, this is more than a tribute to a mode of transport: it’s also a valentine to the sweep of American geography and, in particular, the glory of the Great Plains.

Praise for HOMER
"This subtle picture book beautifully captures the rhythms of a family, with a dog nestled at its heart." --BOOKLIST, starred review

Praise for FARM
Bulletin of the Center for Children's Books Blue Ribbon Book (2010)
* "It's as thorough and pleasing an introduction to a farm as one could ask of a picture book." --THE HORN BOOK MAGAZINE, starred review

Praise for BEACH
Society of Illustrators Gold Medal (2006)
"Cooper's portrayal of a day at the shore is generous with such minutiae; his fondness for his subject is evident and infectious." --SCHOOL LIBRARY JOURNAL