Dirt Bikes, Drones, And Other Ways To Fly (Paperback) 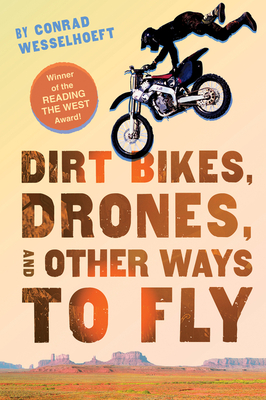 Dirt Bikes, Drones, And Other Ways To Fly (Paperback)


Available to order! Usually Ships to Store in 3-5 Days.
Seventeen-year-old Arlo Santiago lives for the “Drone Zone”—that free, joyful, anti-gravity feeling. He achieves the Zone with risky motorcycle stunts on New Mexico roads, or while playing his favorite video game, Drone Pilot. His gaming skills are so off-the-charts, he’s recruited by the U.S. Air Force to remotely operate real-life drones in Pakistan. How can he refuse the paycheck when his little sister’s health is at stake? This pull-no-punches novel soars, with poetic style, focus on friends and family, philosophical life-and-death musings, and vividly drawn setting of a land “at the intersection of mesa dust and tractor rust.”

"Features both a supporting cast lit up with larger-than-life characters and a protagonist who loves flying recklessly close to the edge but makes right choices in the clutch."
—Booklist