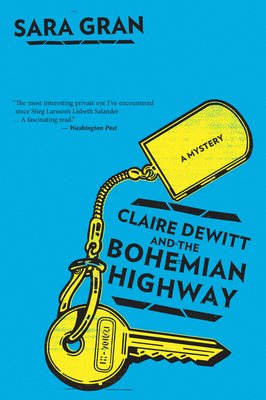 When Claire DeWitt’s ex-boyfriend Paul Casablancas, a musician, is found dead in his Mission District house, Claire is on the case. Paul's wife and the police are sure Paul was killed for his valuable collection of vintage guitars. But Claire, the best detective in the world, has other ideas. Even as her other cases offer hints to Paul’s fate—a missing girl in the grim East Village of the 1980s and an epidemic of missing miniature horses in Marin County-–Claire knows: the truth is never where you expect it, and love is the greatest mystery of all.

Praise for Sara Gran and Claire DeWitt and the Bohemian Highway"The most interesting private eye I’ve encountered since Stieg Larsson’s Lisbeth Salander…A fascinating read." —Washington Post"A fresh, fully realized noir world…The world-weary hipster voice and the absurdist perspective of Claire DeWitt and The Bohemian Highway are what really hold a susceptible reader spellbound. Think of the noir-inflected novels of Paul Auster or even the labyrinthine stories of Jorge Luis Borges. Gran's narrative is an intricate one…[An] introspective and, yes, poetic mystery adventure." —NPR’s Fresh Air "Claire's quest to avenge Paul is compelling, but her insistence on uncovering the mystery of her own self-destruction is what makes this book not just a compelling mystery, but a novel." —O, the Oprah Magazine

"There's absolutely nothing predictable about either the multilayered investigation—cloaked in references to Indian scriptures, Thomas Merton, and cheesy 1980s TV mysteries—or DeWitt herself, who charms despite her fraying life. A" —Entertainment Weekly

"There's a long and distinguished line of famous women in mystery fiction. I have a new favorite female sleuth to add to the list, Claire DeWitt." —CNN.com"Claire, though withdrawn and difficult, is deeply empathetic…Gran’s building something here, something bigger and better than a mere series. She’s building a labyrinthine world and filling it out completely, and I’m just happy to be along for the ride." —Los Angeles Review of Books"The [Claire DeWitt] stories are wise, chilling, insightful and reeking with despair—and yet so beautifully written in an original, quirky style that it is difficult to resist them." —Bruce DeSilva, Associated Press

"Reminds me why I fell in love with the genre." —Laura Lippman

"Claire, or another PI much like her, might have been inevitable—or maybe it just takes a writer as good as Sara Gran to make her seem that way…It’s well worth following Claire wherever she decides to look." —Salon.com"Claire DeWitt and the Bohemian Highway, with its snappy prose and San Francisco setting, is both an homage to hard-boiled detective novels in the tradition of Dashiell Hammett’s The Maltese Falcon and at the same time a brash reboot of the genre for the 21st century…Sara Gran has given the hard-boiled detective a good, hard hipster twist, creating a character with a savagely vigilant mind and a black heart always on the verge of breaking." —The Millions"Gran writes in that hard-boiled staccato style of Dashiell Hammett and Raymond Chandler…It works brilliantly and often to comic effect…If I were to follow my gut instinct I'd say that Gran has a best-seller on her hands." —The Independent "One of the freshest voices in modern crime fiction… Gran has created a female sleuth to cherish." —Daily Mail