From This Moment: A Novel (Paperback) 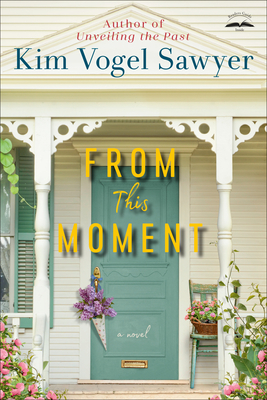 From This Moment: A Novel (Paperback)

From This Moment LP, LB

— From Kansas Notable Books
A lost ring brings together two wounded souls—a youth minister haunted by the past and a spunky church custodian—in this heartwarming romance from the bestselling author of The Librarian of Boone’s Hollow.

A Kansas State Library Notable Book • “Kim Vogel Sawyer is an amazing storyteller who crafts each of her stories with page-turning excitement and rich character development.”—Tracie Peterson, bestselling author of the Golden Gate Secrets series

Growing up in the foster care system, Jase Edgar always dreamed of one day starting his own family. But his fiancée's untimely death shattered his plans. Moving to Kansas and serving as a youth minister should be a fresh start, but he can't seem to set aside his doubts about God's goodness long enough to embrace his new life.

Newly-appointed church custodian, Lori Fowler is battling her own challenges. Her strained relationship with her father and her struggles with overeating convince her she's not worthy enough for love. When an Amish weaver enlists their help locating the owner of a ring found among the donated clothing she uses as fabric, Jase and Lori find themselves drawn to each other. But will they be able to release the past and move forward from this moment into a joyful future?
Kim Vogel Sawyer is a highly acclaimed bestselling author with more than one million books in print in seven different languages. Her titles have earned numerous accolades including the ACFW Carol Award, the Inspirational Readers' Choice Award, and the Gayle Wilson Award of Excellence. Kim lives in central Kansas with her retired military husband, Don, where she continues to write gentle stories of hope. She enjoys spending time with her three daughters and her grandchildren.
Praise for the novels of Kim Vogel Sawyer

“Kim Vogel Sawyer has a unique ability to connect readers to their own foibles and needs by exploring the hearts of her characters with great insight. I highly recommend this amazing novelist.”—Hannah Alexander, author of the Hallowed Halls series

“Kim Vogel Sawyer is an amazing storyteller who crafts each of her stories with page-turning excitement and rich character development. I’ve known Kim for many years and can honestly say that her books are some of the most satisfying and delightful I’ve read. I feel confident my readers will enjoy her novels immensely.”—Tracie Peterson, bestselling author of more than one hundred fiction titles, including the Golden Gate Secrets series

“Kim Vogel Sawyer paints characters with exquisite detail emotionally and physically, then sets them in a story that transports the reader into a world equally as appealing as the people who live there. A captivating read, leaving you wanting more.”—Lauraine Snelling, author of To Everything a Season, Wake the Dawn, and Heaven Sent Rain

“In The Librarian of Boone’s Hollow, Sawyer provides a delightful look into the rich history behind the historic packhorse librarians of Appalachia, sweeping readers into the backwoods of 1936 Kentucky with fantastic period details and dialects that shift with each character’s point of view. Contrasts between characters’ frames of mind, such as propriety and faith versus anger and fear, create emotional depth and allow Sawyer to celebrate the healing power of kindness and love. With a grace-based message of self-worth, this suspenseful historical romance is sure to charm readers.”—Booklist (starred review)

“A Silken Thread is a truly inspirational tale cemented in the bonds of family and true friendship.”—Publishers Weekly (starred review)

“Sawyer’s Beneath a Prairie Moon is laced with humor, danger, and unexpected plot twists.”—Library Journal